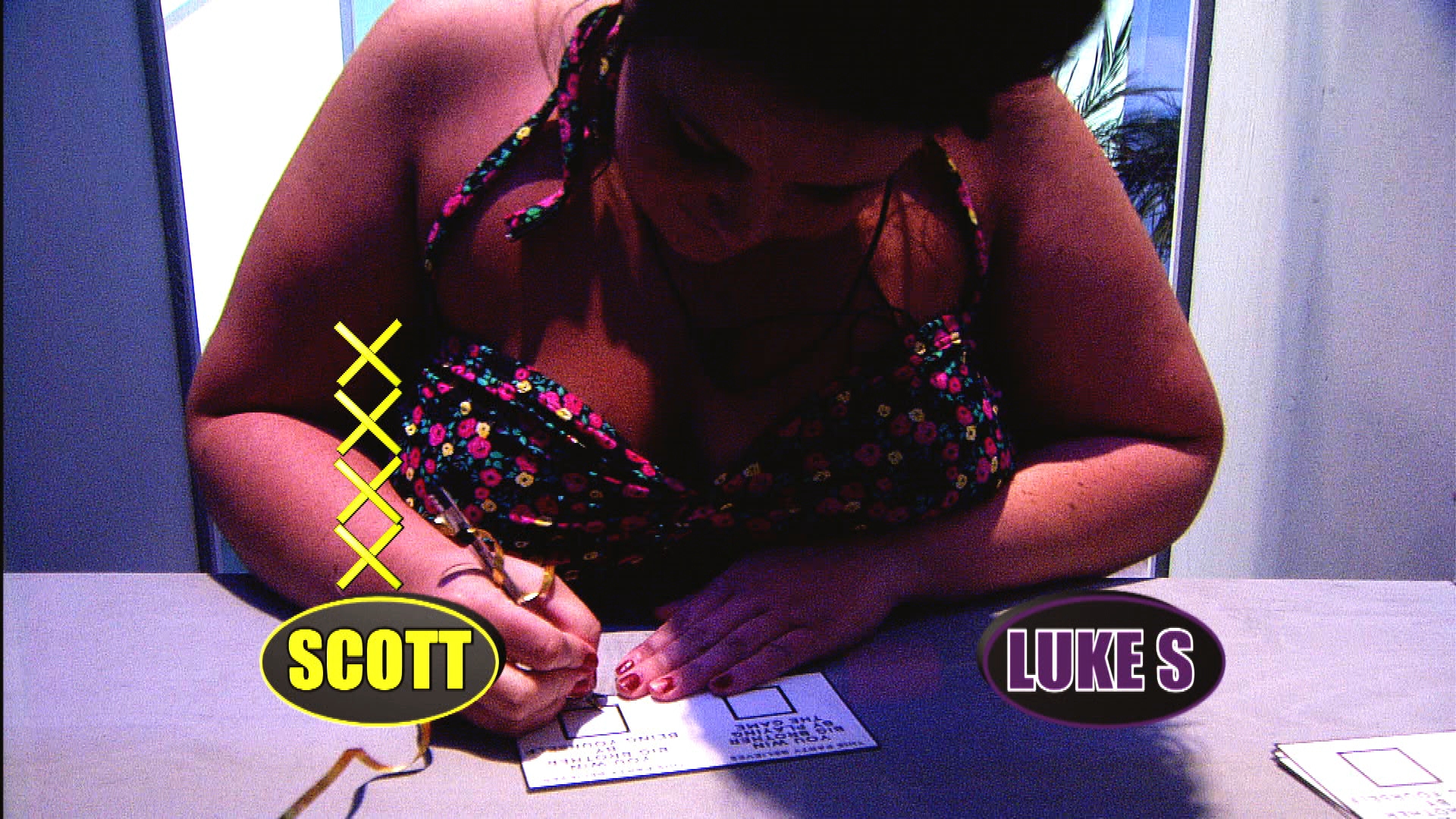 Day 51 in the Big Brother house…

For this week’s shopping task, housemates have been attending party after party, after party and at those parties they face a variety of games. To win a luxury shopping budget they must fail no more than three games. This morning the party continues, housemates have been told whenever they hear Big Ben’s chime; they must gather in the living area and sing Auld Lang Syne. Housemates are woken up and race to sing the traditional NYE song in their PJs.

Yesterday Luke S and Ashleigh fell out over his body odor. He asks her, ‘Did you have fun telling them that I smelt like an onion?!’ She grins, ‘A little bit.’

Conor goes to see Big Brother and talks about Deana. ‘I’m sore from all night raving! The company wasn’t too good, the music was cr*p.’ He adds, ‘We both made our feelings felt. I think we have found a bit of common ground after last night. I still wouldn’t trust her. No bad feelings, it’s fine.’

The conversation then turns to the Pyramids in Egypt; Sara explains that there’s a fast food joint not far from one of the pyramids. Caroline giggles, ‘I thought you could get a cheeseburger at the top of the pyramid!’

Sara says, ‘I didn’t say that. It actually really upsets me when someone tries to belittle me in here, I don’t appreciate it.’

Caroline has Sara on her mind in the diary room. ‘Sara is being stupid, over sensitive, completely barking mad! I just couldn’t stop laughing and then she got really upset.’ The blonde continues, ‘All I could picture was someone ordering a pizza delivery on the pyramid! Sara is just bizarre.’

2.19pm
For the next part of today’s task Big Brother has invited Scott and Luke S to go head to head in a party political debate.

After their debate the two will be asked who they think the rest of the housemates have voted for; if their choice matches the vote then they have passed. Luke S is the first to make his case that you need a game plan to win Big Brother. ‘You can say is game playing being their self? It can be interpreted in different ways! We all know we have to vote once a week and tactical voting may take place, so technically they maybe playing the game!’

Scott argues you can be yourself and win Big Brother. ‘You deserve to win it as you are honest to yourself and the ones around you. The final reward will be more meaningful to yourself. However the reward for winning this reality show should be for being real.’ Housemates cheer!

It’s now time for the housemates to cast their vote and the candidates head to the diary room. The two now have one last debate, to guess which political party won the debate. They choose Scott’s party, and will discover at the end of the shopping task who won the debate.

Housemates are getting ready for their next task, an office party. Earlier, housemates picked three bosses and their PAs. The first pair are Adam as boss and his PA Luke A, the second team are Sara as boss and Deana as her assistant and final pair, Scott the boss with his PA Becky.

They will compete over three rounds of office games but Big Brother has a trick up its sleeve! Passing or failing this party game is down to Sara alone. Big Brother tells her that she must win at least two out of the three office games to win this part of the task for the house. She smiles, ‘Sneaky little devil!’ The model is told that it is imperative that this must remain a secret but may tell her assistant Deana so that she can help them win the task.

In the garden, Sara discreetly confides in Deana about her secret task.

The housemates get to work putting on their office attire.

The office party begins; time for round one! Each boss must be spun on their chair by their PA, before having to race on their office chair to a biscuit without spilling their cup of coffee. The winner will be the first boss to pour their coffee into a container.

They get to work. Deana tries to put off the two other teams. Becky shouts, ‘What the f**k are you doing Deana?!’

Sara is the first and is one up in the race for best boss!

Round two; bosses must identify five noises housemates have previously made. The first boss to call Big Brother on their office phone will win a point. Adam wins this round hands down!

Adam and Sara are level. She must win the next and final round to win the task.

In the last round, each boss must guess each housemate that their PA draws on the whiteboard. Sara and Deana secretly discuss who Deana will draw.

All housemates laugh at the drawings! Scott shouts at Becky’s drawing, ‘What the F is that?!’ Becky draws Arron, Scott quips, ‘I forgot about Arron!’

Lastly, Sara is up and guesses Conor correctly after Deana draws only a circle. Sara is announced the winning boss, with the help of Deana! She is rewarded with a ‘best boss’ mug.

Becky is in the diary room. ‘There’s cheaters amongst us! Everyone’s getting annoyed with everyone!’ She continues, ‘Deana does my head in, she’s the biggest cheese face! Sara is getting very stressy! Lots of tantrums in the house.’

Luke A and Adam are discussing Deana. ‘Come on, she’s cheating against her friends! Going against our friendship.’ Luke A adds, ‘She may have a reason for doing it…lets hear her side of the story. F**king women! Office games are ruthless.’

Outside, Deana is talking to Sara. ‘Adam is really angry. The thing is he’s my friend, why is he falling out with me?’ The model adds, ‘Oh well, we passed!’ They high five!

In the living area, the other housemates are talking about Deana. Luke S says, ‘She’s trying to play on Sara’s caring side. She did cheat in the task and Deana was there to help her along.’ Becky quips, ‘What a d*ck!’

Deana joins Adam and Luke A in the bathroom. Adam asks her, ‘Why? Why?’

Luke A asks the beauty queen to come and sit down.

Deana says, ‘Don’t make an issue out of anything!’ Luke A adds, ‘Just chill. Look me in the eye, did you cheat in that?’

She replies, ‘It’s only a game…why are we talking about it?! Unbelievable; use your brains my god.’ She walks away, Adam adds, ‘See that’s insane!’

Sara adds, ‘I didn’t want to cheat! We had tactics.’

It’s been six minutes since the reveal. Sara tells Scott and Caroline, ‘I wouldn’t cheat in anything in life! People get so competitive in here!’

Scott adds, ‘It did seem like people were about to cry…us three take tasks a lot light hearted.’

Caroline asks the model, ‘You must have felt really on edge?’ She replies, ‘It’s not nice being put in a position.’

In the kitchen, Deana asks Adam, ‘Why didn’t you trust me? I kept saying leave it!’

He replies, ‘I know, I know…but you were so out of character!’ She adds, ‘You should trust me, we are soldiers!’ He apologises and they hug.

Sara and Becky attempt to clear the air. Sara admits, ‘That task was horrible…’ Becky replies, ‘You got to understand that we generally thought you were cheating. I’m not angry at you.’

Adam talks to Big Brother in the diary room. ‘This peculiar bizarre behavior is ‘cos they were trying to win the task. Mind games Big Bro!’ He adds, ‘I don’t always trust people right away…I need to change myself a little bit.’

Becky and Sara continue their conversation in bathroom. Sara says, ‘I thought you were my really close friend in here?’ Becky nods and adds, ‘I don’t like confrontation with you.’

In the garden, Luke S tells Scott, ‘Moods are being magnified; they sense we’re near the end.’ Scott quips, ‘I don’t want confrontation with Sara!’

Caroline is playing a dangerous game in the bedroom. She is lying down on her bed, throwing and catching a shampoo bottle above her head when she accidently drops the bottle onto the side of her eye. She starts to cry and some of the housemates comfort her. Scott rushes to get her a bag of frozen peas for the bruising. Ashleigh tells her, ‘It’s fine, the smallest bruise you will ever see in your life!’

Caroline‘s cries then turn into laughing and she’s called to the diary room. ‘I’m fine honestly!’ She laughs, ‘I don’t have concussion! I was being really stupid.’ Big Brother advises her to be a bit more careful in the future.

Becky is finding all the confrontation a bit cringe. ‘I hate it Scott!’ Caroline says, ‘You two wanted to win!’

Adam, Luke A and Conor are making bread in the kitchen. Adam starts to knead the dough. Luke A looks on, ‘I’ve never seen that technique before!’ Conor then asks for a go and jokingly slaps the dough. They laugh.

After an eventful day, Sara comes to the diary room in tears. ‘I’m fine. I don’t know why I’m upset. I can’t wait to get home. I’ve never been with people like this before.’ The model continues, ‘Normally it’s me that sorts my friend’s problems out, in here I just get upset and I don’t know why. I hate bitchy people. You can’t speak to any of them; they go behind people’s backs and bitch.’ A tearful Sara concludes, ‘Tomorrow is a new day, so will wait and see what it brings.’