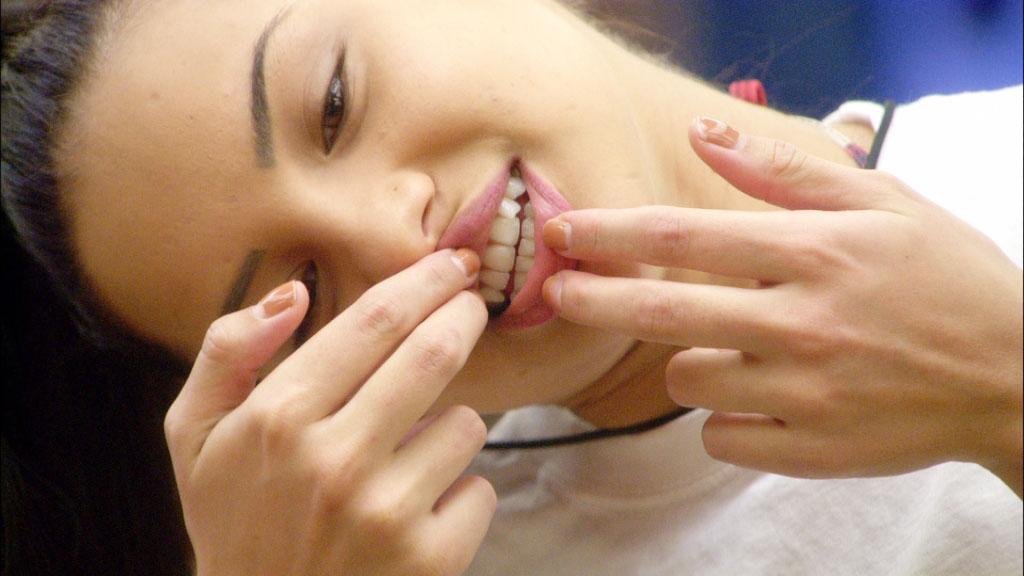 11.33am
For this week’s shopping task Frankie has become The Dictator, loyally supported by his palace guards Razor and Rylan. To win a luxury shopping budget for the house, Rylan must stage a revolution and overthrow the entire regime. In the Dictator’s palace, guard Ryan thinks “something may be up,” with Heidi & Spencer and thinks they could be out to sabotage the task. He mentions that he heard Spencer comment along the lines of if housemates go through “it was bad before,” that he was going to ramp up his vendetta.

Rylan is in the igloo briefing the other housemates on the revolution.

In the palace, Ryan asks Razor if he wants to be in the house until the end. Razor says that he does and Ryan tells him that to do this he must “vote for the girls,” adding: “The girls in the house will never nominate each other”. Razor agrees then adds: “We’re not allowed to talk about voting.” He adds: “Even if Speidi makes it through tonight it means the public want them there, they won’t let them win, but they want them there. Don’t even waste it, just put it elsewhere,” Ryan advises.
The housemates in the igloo are pumped and raring to go, “Let’s do this,” Gillian exclaims.

His Excellency has decided to rally his people with an address; little does he know that his people have no interest and are staging a revolution, wrecking the house and preparing to topple his statue. As the housemates run riot, ripping up posters, daubing paint on the flags and exploding Frankie’s statue, Big Brother plays a warning into the house for the Dictator alerting him and his guards that “trouble has been detected ” in the main house.

Later Spencer tells Big Brother that destroying the palace was “blissful,” and he and Heidi refer to Frankie as a “dork” and a “loser.” Rylan told Big Brother that the excitement of the revolution was “like winning Miss World.”

12:51pm
Tonight, either Rylan, Claire, Lacey and Spence & Heidi will be leaving the house. In the bedroom Heidi & Spencer plead to be “out of here tonight,” and tell Rylan that they think either Claire or Lacey will be evicted. “I have a feeling it’s going to be a double,” muses Rylan. Spencer tells him, “If you did to anyone else what you did to us,” he would have been voted out. They mention Lacey’s input and claim that she is not that well known. Rylan tells them that Lacey has 33 thousand followers on Twitter. “None of those are voting though, they all want naked pictures,” quips Spencer.

1:22pm
After winning a luxury shopping budget the housemates get started on their shopping list. Heidi is in the shower and Spencer tries to peak over the top whilst wolf whistling at his wife. Spencer opens the door and writes Spencer loves Heidi in the mist on the door.

2:55pm
Big Brother has delivered the housemates’ shopping. Some of the housemates rush to the store room. Claire tells some of the housemates that she is “scared” of putting on weight while in the house. Heidi & Spencer are in the bedroom, criticizing their fellow housemates. “They’re like 5 or 4 year olds,” he scoffs then adds, “What’s with all the baby talk 24/7,” the adopts a whiney voice adding: “What’s wrong with Heidi & Spencer?” “We came here to beat all you sucky babies,” Heidi continues then sings, “We’re gonna win, we’re gonna win.” She tells her husband that the housemates are “thankful” that the couple stays in the bedroom for most of the day.
4:05pm
Ryan is working out using bottles of water for weights. Lacey is in the bedroom talking to Heidi & Spencer about tonight’s eviction. She tells them that viewers may think that they are boring, “cos you’ve been staying in bed.”

Housemates are not allowed to sleep during the day and Razor is snoring away on the sofa. Big Brother sounds the alarm and he sits up quickly adding, “That’s all I need.” In the bedroom Heidi & Spencer comment on their conversations with Lacey and remark, “I love that she thinks we’re going home.” Heidi tells Spencer that Lacey is “like a throwaway.”

6:36pm
Claire is thinking about tonight’s eviction and tells housemates that she “feels sick.” Tricia adds: “It’s got to be Heidi & Spencer, if not; I’m starting to wonder why.” Last night, Heidi & Spencer and the rest of the housemates heard a conversation between Frankie and Big Brother where Frankie said that the couple “frightened” him following their argument with Rylan and they were his “least favourite” housemates. Frankie asks the couple if they are upset with him after hearing his revelation. He approached the couple and asks if this is why they have been ignoring him. They tell him that he is and Frankie laughs while telling them to “grow up.” Spencer takes offence and says that this has made him dislike Frankie even more. They head to the igloo and Heidi adds sarcastically, “You’re such a great father figure.” Spencer tells her, “Everyone here is so out for themselves.”

7:47pm
It’s not long before tonight’s eviction and the event is playing on Rylan’s mind. He tells Heidi & Spencer that it’s “nerve wracking,” and they assure him that he is “safe,” tonight. Earlier, the housemates facing eviction each confided in Big Brother. Rylan admitted to being nervous, “It’s not knowing what’s waiting on the outside.” Lacey said she was feeling “sad and teary,” but knows that her time in the house may soon be over. Heidi & Spencer claim to be “Titans” and “Spartans” and plan to come up with the “best strategy to win.” Claire claims to feel “safe and protected” in the house and is worried about facing the eviction crowd. Rylan confesses that he feels more nervous about being on this show than he ever was during his time on the X Factor. Lacey is the third housemate to be evicted from the Big Brother house.

10:21pm
It’s been 10 minutes since Lacey left the house. Frankie tells Heidi & Spencer, “The public love you.” “We’re gonna win,” they beam. Big Brother gathers housemates on the sofa. Housemates speculate that Big Brother has more in store for them and while they mingle, Big Brother announces that they must all gather on the sofas. Razor and Ryan are called to the diary room and the housemates feign sounds of disapproval. Ryan and Razor appear on the plasma screen and Big Brother reminds them of a conversation they had earlier today at 11:34am. Housemates listen in as Big Brother relays the conversation they had in the dictator’s palace where Ryan mentioned how the girls will vote and what to do with their own votes.

Big Brother explains that this is a rule break and therefore, as punishment, Ryan and Razor will face the public vote – and so will all of their fellow housemates. Frankie and Razor exit the diary room and apologies to their housemates. Ryan insists that he wasn’t being vindictive or “ganging up” with Razor and some of the housemates are relieved that they won’t have to nominate each other. Ryan tells housemates that the conversation he and Razor had “was no different than anyone else’s,” in the house.

10:30pm
Big Brother has provided drinks for the housemates. In the kitchen Claire warns her fellow housemates to keep and eye on the bottles of wine and hints that Spence & Heidi may take one for themselves. Heidi & Spencer have come to talk to Big Brother. They tell Big Brother that Razor and Ryan were speaking the truth during their rule break. “I wasn’t shocked, it just shows that they’re rookies in the game,” muses Spencer. “Friday can’t come faster,” Heidi adds.

11.28pm
Rylan is chatting with Razor and says he’s a bit unsure of Ryan. Heidi is talking to Gillian about being saved. Gillian thinks she’ll stay until June.

11:42pm
Following Razor and Ryan’s rule break Razor has come to talk to Big Brother. He is worried that he messed up adding: “Why would I try and influence people,” and says that if he leaves the show like this, “Would leave a sour taste.”

Heidi & Spencer are in the kitchen with some of the other housemates. “I love you,” Heidi tells him and nuzzles his neck, “I wanna get naughty, it’s been too long,” she whispers as Tricia and Gillian look on. Gillian says that seeing the pair so close make them miss their partners “other halves,” even more. Heidi repeats, “other arfs” and asks what it means. “Our partners, half,” they stress and Heidi giggles.

Rylan and Ryan are in the garden talking about sexuality. Ryan says that people shouldn’t care whether someone is gay or straight. “In my mind, who cares,” he adds and Rylan says: “Personally, I’d rather have a straight child.” He explains how difficult it was for him growing up and said that if it came down to the push of a button, “I’d be banging the f**k out of that button.” Rylan says that he is now very happy with his life and knows who he is.

Frankie bids goodnight to some of his housemate who are still drinking in the kitchen. Heidi & Spencer begin to mock him. “We’re scary, are you gonna cry, we might get you (in the night),” they laugh. “I’m only small,” jokes Frankie as Heidi repeats, “It’s just a game.” “I’m just sorry your still bloody here,” Tricia quips as she and Gillian get ready to leave. Spencer tells them that they are next on his list, even though they are “national treasures, you gotta go after the most loved,” he grins.

00:55am
Ryan is opening up to Claire and admits that on their first night in the house he guessed that she or Rylan could win the show. Spence & Heidi are in the living area with Rylan. Spencer hits Heidi’s bum and she pleads: “Again, again, what do I have to do to get more?” Heidi dances in front of Rylan, “I’ve never seen you drunk,” he remarks. Heidi says that she is “the most fun drunk ever,” and Rylan tells her that she should try and be herself a bit more. “I can’t, this is not my usual environment,” and Spencer tells him that being in the house is “torture.” “Make the best of what you’ve got,” Rylan advises.

01:35am
Rylan is washing his pants. All of the other housemates are in bed. Heidi & Spencer are lying in bed, “I love you,” they tell each other. “I could easily do 8 or 9 more days; do you want me to roll onto you?” Heidi whispers as Spencer grins. “Oh, invitation,” Heidi grins and moves closer to him with her hand under the duvet. “No leg over, you can’t move it, keep it there, it would be inappropriate,” Spencer replies. “If it’s gets stuck, you can’t adjust, it feels like a ju-jitsu move, I’m already locked in,” he smiles. “How deep?” Heidi asks, “Deep, I want another one,” he smiles adding, “No, not that one, a good one.” He sighs and Heidi whispers into his neck, “Good night my hero.” “You should drink beers more often,” whispers Spencer.