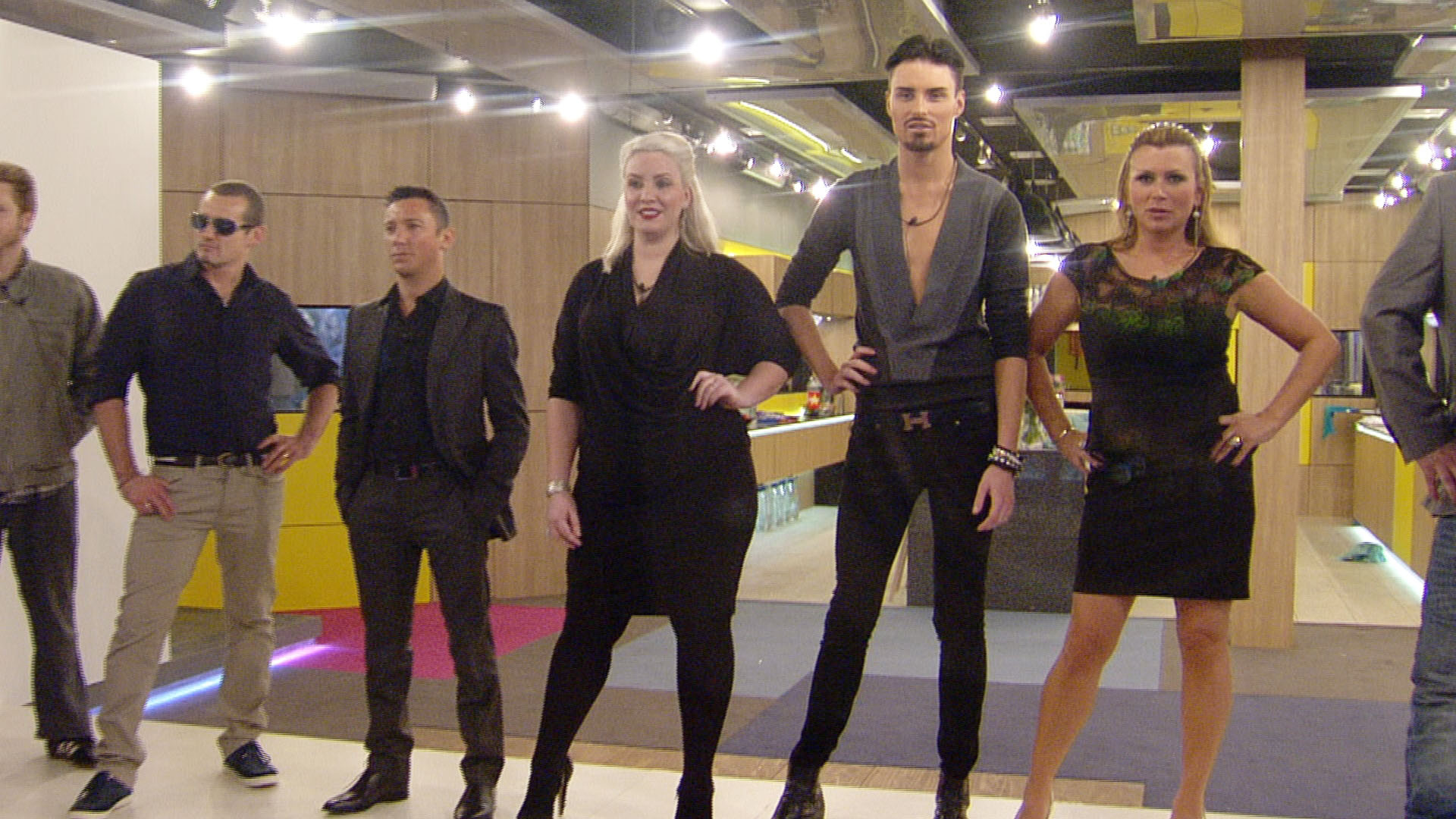 Claire, Ryan and Rylan are in the bathroom. Ryan is feeling down. He says, “I know you guys are having a ball, but when people are asleep can you not come in and wake everybody up please, it’s getting me down.”

The rest of the housemates are in the living area talking about Ryan not receiving his letter last night. Razor remarks, “The thing is we’re an hour away from our family, but his are half way around the world and when he gets out no one’s going to be there.”

Back in the bathroom Ryan is still discussing the letter situation with Ryan and Claire. He says, “When we all said no to the letters I felt really proud of the team. Then last night I was confused as to why the team didn’t stick together again and why it was okay for three people to not get their letters, when the other night it was not okay for one person not to get the letter.” Ryan starts crying and Rylan gives him a hug.

Razor asks Spencer in the living area, “What’s he saying to Tricia?” Spencer replies, “He’s saying you guys opening the letters let the team down. This isn’t a team sport, you wanna play team go play rugby or football don’t play Big Brother. He’s trying to get saved he’s bringing in the heat.”

Spencer finds Tricia in the bathroom. He says, “He’s entitled to feel how he wants to feel, you don’t need to put that on yourself. You needed that you needed that more then anyone in here. Don’t beat yourself up about it.” Tricia justifies opening her letter by saying, “We just got a second chance and the girls really needed it.”

Spencer goes into the bedroom where Rylan and Claire are getting dressed. He points at Claire and says “Do not feel guilty not one little bit – this is not a team sport. I don’t care what he says to you, he’s supposed to be a strong tough man, and he’s totally out of line. He doesn’t need to come make you feel bad for something that brought you joy” Claire replies, “Thanks Spencer.” Rylan and Claire sit on the bed and finish getting dressed. Rylan comments about Ryan, “If you’ve got something to say it get it out deal with it and move on.”

Ryan is by himself letting off steam in the gym.

Heidi and Spencer are in the diary room talking to Big Brother about Ryan. Spencer says “If you’re here for the experience, experience what it’s like to not get your letter and them get their letter. You don’t have to go and make the girls cry.” The conversation then turns to the eviction on Wednesday. Spencer says “I am just very stressed out. If we made it this far and get evicted before Friday it’s just going to be like a bad dream.”

For today’s task housemates have been asked by Big Brother to dress to impress and are striking a pose on the Big Brother catwalk. What they don’t know is that they are being watched by special guest, ex-housemate Paula. Paula is in the Fashion Police headquarters and when she is asked by Big Brother “Which housemate is the most stylish” she replies, “That’s easy, Rylan.” As the best dressed housemate, Rylan will join forces with Paula for the task. Rylan joins her in the Fashion Police headquarters. They both scream when they see each other and hug.

Their first job is to assess the other housemate’s crimes against fashion before choosing the two worst dressed housemates. Paula and Rylan are discussing the housemates’ choice of clothing. Big Brother asks the rest of the housemates to assemble in front of the TV. They see Paula and Rylan on the screen and cheer. Big Brother asks, “You and your deputy should critique each housemate. Big Brother wants to know what you really think about their fashion choices.” Rylan comments on Claire “Please make more effort with the hair.” He moves on to Tricia, he looks at Paula, “In your words, mutton dressed as lamb, sick and tired of the same hair band and needs to make friends with her age.” Rylan and Paula then declare that the worst dressed housemates are Ryan and Tricia.

As the two worst dressed housemates, Tricia and Ryan have been sent to Paula and Rylan to be given a fashion makeover. Tricia hugs Paula and comments, “You look gorgeous!” Ryan asks, “Alright, so what do we have to do?” Rylan replies, “We’re going to dress you up.” Paula and Rylan get to work on choosing outfits from the clothing racks for Ryan and Tricia. Both housemates seem to be enjoying themselves as they are styled by Rylan. Paula prepares Tricia for the catwalk, “Don’t lift your head up keep your head there it will give you a nice jaw line. I want you to put a little smile on your face, a little cheeky smile.”

All housemates are gathered at the catwalk and Big Brother asks them to give a warm welcome to their host Rylan. Rylan announces, “Ladies and gentleman, welcome to the 2013 Celebrity Big Brother catwalk selection! Two of the ugliest ducklings Celebrity Big Brother has ever seen, have blossomed into beautiful swans. I can tell you’re as excited as am I, so let’s get some music and get on with the show!” Tricia and Ryan enter the catwalk to cheers. Razor seems to be enjoying himself shouting, “Yeah Baby” as they strut down the catwalk. Rylan finishes the show by getting the models Ryan and Tricia out. He then says, “Please welcome my boss the chief of the fashion police, Miss Paula Hamilton.” Paula enters the catwalk and the other housemates chant her name.

Spencer and Heidi are in the bedroom with a beer talking about Paula whom they describe as an ‘angel’. Heidi says, “Bless her so infinitely I love her so much.”

Razor and Rylan are in the smoking area speculating about when the next eviction will be.

Back in the bedroom Heidi is declaring her love to Spencer. She comments, “Thank you for loving me so much and for being so kind and thoughtful and generous and sacrificing everything in your life for me. God bless you so infinitely in every dimension, in every realm through all states and continuing.” Spencer laughs and replies, “You sound like you’re in Star Trek.”

Big Brother has been playing music into the house. The housemates are all in the living area dancing. Spencer is sat on the sofa and Heidi is provocatively dancing in front of him. Spencer comments, “You’re so good.” Heidi continues to dance; Spencer whips her and says, “I would be tipping you none stop, putting the hundreds in there.” Heidi goes to straddle Spencer, he adds, “No no no don’t take it there, I can’t, still on TV dear, save it for the house.”

Rylan and Razor are in the garden talking about Heidi and Spencer. Rylan thinks, “It’s like they’ve not seen each other for a couple of years.” Razor replies, “You know why they’re like that, I think it’s because no one likes them.”

Spencer is in the diary room talking to Big Brother. He comments, “It’s been a very pleasant night, I wish every night in the Big Brother house was as smooth as this one.” Heidi is stood outside the diary room door waiting for Spencer to come out. Razor notices and says to Rylan, “Look at her waiting, look at her its just embarrassing.” Rylan adds, “I’ve seen it don’t, don’t, she is standing there waiting at the door, it’s sweet but it’s wrong.” Spencer leaves the diary room; Heidi hides behind the door and jumps out at Spencer. Spencer jumps in shock and Heidi is pleased that she scared him.

Heidi and Spencer are in the bedroom. They are lying on their makeshift bed. Spencer tells Heidi to turn the light off.

Meanwhile in the kitchen, Rylan has put Claire’s underwear on and is running away from her.
Razor is in the diary room talking to Big Brother about the final days in the house and thinks her has a chance of making the final.
Back in the house, Claire has a pair of flip flops in her hand and chases Rylan through the house. Ryan captures Rylan and Claire he hits him on the behind with her flip flops; the trio seem to be having fun.