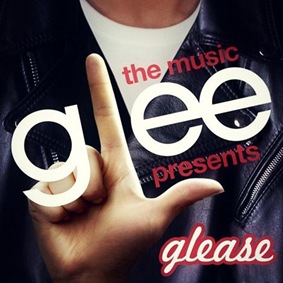 Get ready to hand jive with McKinley High’s Glee Club as they take on the timeless classic Grease with the release of Glee: The Music Presents Glease, available now.

This release date will give fans a sneak peek of new songs from the electrifying Grease themed episode airing in the UK on 10th February. Glee: The Music Presents Glease showcases the cast of Glee’s distinctive style as they take on unforgettable hits from Grease such as “Hopelessly Devoted To You”, “You’re The One That I Want”, “Greased Lightning” and more (see below for full track listing). In addition to the Glee cast favourites, the release also features this season’s newcomers, as well as special guest Kate Hudson.

This month Glee made a triumphant return with the prime time premiere on 6th January on Sky 1 HD. Following the challenges of the current Glee club alongside the post-grad lives of Rachel and Kurt in New York City, the season kicked off with classic performances such as Adele’s “Chasing Pavements”, Billy Joel’s “New York State of Mind” and this summer’s pop anthem Carly Rae Jepsen’s “Call Me Maybe”. The excitement increases this season with Hollywood superstars Kate Hudson and Sarah Jessica Parker guest starring, playing Rachel’s dance teacher and Kurt’s boss respectively.

From the anthem hit “Don’t Stop Believin’” to the pop phenomenon “Teenage Dream” to the widely praised mash-up of Adele’s “Rumour Has It” and “Someone Like You”, Glee has sold more than 48 million songs and over 12 million albums worldwide.

Check out the track list for Glee: The Music Presents Glease below.