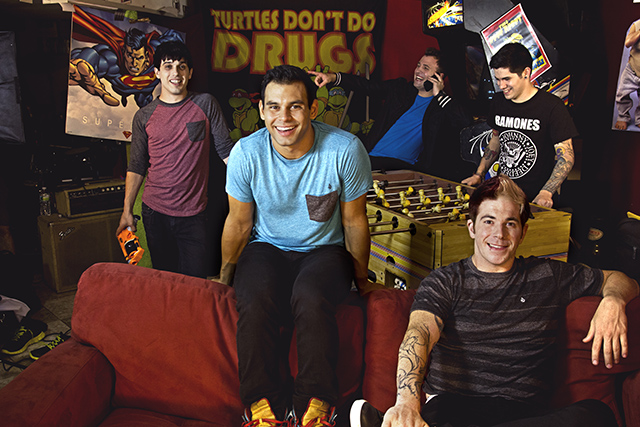 Patent Pending and Erik Chandler are coming to the UK for a co-headlining tour.

Following a hugely successful debut trip to the UK and Ireland last October, New York’s Patent Pending have announced they will be returning in April for their ﬁrst British headline tour. The band will play a string of dates alongside co-headliner Erik Chandler, bassist for Texan pop-rockers Bowling For Soup.

The buzz around Patent Pending built well ahead of their ﬁrst UK tour last year with their hilarious “Douchebag” video becoming a favourite on Scuzz TV and by the time the ﬁvepiece’s catchy brand of pop-punk stormed the UK and Ireland, the band had already garnered an army of fans who packed into venues early to make sure they caught the Billboard Award-winners’ wildly energetic live set.

In addition to winning “Dream-seeker Artist Of The Year” at the 2012 Billboard Awards, the band performed their single “Dance Til We Die” live in front of 10,000 people at the starstudded awards ceremony at Las Vegas’s MGM Grand Arena with millions more watching live on the ABC network and online around the world. Within minutes of the broadcast, the band were trending worldwide on Twitter.

Patent Pending’s ﬁrst UK headline tour also features Bowling For Soup bassist Erik Chandler, who is no stranger to performing his solo songs in front of British audiences thanks to his annual acoustic tours with BFS frontman Jaret Reddick. Patent Pending’s friendship with the Texan band dates back to numerous US support slots and the pairing of both acts on this side of the Atlantic last year proved to be the perfect partnership. Fans can expect just as much fun in April and the opportunity to see Patent Pending perform a full headline-length set.