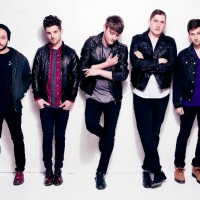 Kids In Glass Houses will release new album ‘Peace’ through Transmission Recordings on 30th September, 2013. The album was largely written during a series of sessions at guitarist Iain Mahanty’s house. Where 2011’s ‘In Gold Blood’ was a head-trip through a fantasy world, ‘Peace’ is a boundlessly entertaining collection of songs that proves beyond all doubt, that Iain, vocalist Aled Phillips, guitarist Joel Fisher, bassist Andrew Sheehy and drummer Philip Jenkins, can write one hell of a tune.

“The approach to this record was to do something in the vein of what we used to do, where we focused on writing singles, as on ‘Smart Casual’ and ‘Dirt’,” says Aled. “Then again, it’s as experimental as the last album, but instead of making one big, sprawling album we tried to make each song as catchy and memorable as possible.”

And that’s exactly what they’ve done. ‘Peace’ fizzes with ambition and melody, because Kids In Glass Houses stripped back the dramatic concepts and instead focused on what really matters to them. Being in a band is one of the best ways possible to spend your days, and the simple joys therein inspired their most confident album yet.

Having formed in South Wales, Kids In Glass Houses rapidly rose to prominence after being championed by their peers as talented newcomers. By the time of the release of debut album ‘Smart Casual’ in 2008, they had a Kerrang! Award nomination and numerous tours already under their collective belt; once it surfaced, things went crazy for the quintet. Support tours with the likes of Paramore and Fall Out Boy swiftly followed, and before long work had begun on what would become second album ‘Dirt’. Daytime radio play, festival main stages and significant press attention would greet its release in 2010, teeing up their shift into darker territories with ‘In Gold Blood’ the following year. What ‘Peace’ does is both serve as a reminder of what Kids In Glass Houses have achieved thus far and signal a bright new future for them. There’s a gleeful simplicity to it, that’s summed up by Aled himself: “We wanted to make something that sounds fresh – it doesn’t necessarily sound like what guitar bands are doing at the moment! But it sounds like us, our own little niche. And more importantly, I want people to take it for what it is, which is ten awesome songs.”

Never ones to shy away from a grueling touring schedule, Kids In Glass Houses will hit the road hard in the coming months, with tour dates scheduled across the globe, including a headline run throughout the UK & Ireland in Sept / Oct, and an appearance at Y Not coming up.