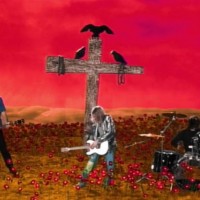 The video, released as a single on Nirvana’s ‘In Utero’ album in 1993, was directed by Corbijn from Kurt Cobain’s personal treatment. The ‘Director’s Cut’ includes alternate footage previously only available to view on The Work of Director Anton Corbijn, a DVD show reel showcasing Corbijn’s film work.

The video can be found on the 20th Anniversary Nirvana ‘In Utero’ deluxe edition scheduled for release on September 23rd. The multi-format release that spreads more than 70 remastered, remixed, rare, unreleased and live recordings over configurations ranging from a 3-CD/1-DVD Super Deluxe Edition to a standard digital/CD remaster of the original album. Material exclusive to the various versions of the In Utero 20th Anniversary reissue will include a veritable treasure trove of never-before-heard demos, B-sides and compilation tracks.

Check out the video, below. For more info, click here.