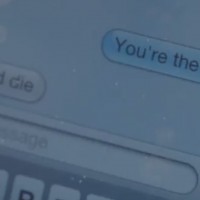 A shocking new ad from anti-cyberbullying charity The Cybersmile Foundation shows a teenage victim of cyberbullying becoming suicidal. The ad was created to emphasise the importance of not retaliating to ‘trolls’ when provoked.

A total of 38% of young people in the UK have been affected by cyber-bullying, according to Government figures released this year. There have also been many high-profile cases of cyberbullying, with young celebrities who have fallen victim to online abuse speaking out.

Cheryl Cole spoke out about her experience of cyberbulling saying that ‘In the last few years, I’ve been bullied on Facebook and Twitter. It’s evil and very public.’

Singer Cher Lloyd has admitted to getting “at least ten tweets a day saying I’m a dirty pikey”. Cher spoke out in detail on how she felt while being cyberbullied: “Me as a person, when I was going through that certain time, when I was getting all this online abuse, I became completely cut-off from everything. I didn’t want to go out of the house, I didn’t want to speak to anyone. I didn’t want to do anything just in case something really bad happened to me.”

While Jesy Nelson, of the pop-band Little Mix, spoke out after getting abuse on Twitter over her size: “When you’ve got your own insecurities and then when people go and tell you and write them on websites for everyone to see it just makes you feel really rubbish”.

Olympian diver Tom Daley shamed his troll last year when he tweeted: “After giving it my all…you get idiots sending me this…RT @Riley_69: @TomDaley1994 you let your dad down I hope you know that.”

Cybersmile Foundation founder, Scott Freeman, said: “Do not retaliate is the single most important piece of advice that we can give to a potential victim of cyberbullying. If followed, the advice helps to reduce anxieties and allows for clearer thinking at a time when somebody is making a very real, life or death decision. During production of #DONTRETALIATE, there were three cyberbullying related suicides in the UK. We just hope that the film is well supported and reaches the people that need to see it. If this film saves just one life, it has all been worthwhile.”

In the film, a young girl who is receiving abusive messages and texts is shown being followed around by a rope tied in a noose – symbolising her suicidal thoughts.

As the cyberbullying continues, the rope slowly lowers over her head and tightens round her neck. She goes about her everyday life wearing the noose, but her family and friends are not able to see it.

The film, called #DONTRETALIATE, ends with a depiction of the all too common tragic end result of cyberbullying.

The film was directed by Ed Morris, with the production company Rattling Stick.