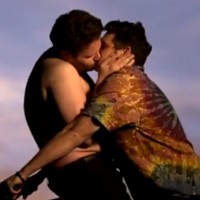 James Franco and Seth Rogen have recreated Kanye West’s latest video, Bound 2, which shows the rapper getting up close and personal with a topless Kim Kardashian on a motorbike.

The hilarious actors have made an almost perfect copy of the video – and even locked lips for their art.

“Thanks!” Seth replied. “Some of those positions were really uncomfortable. That s**t is harder than it looks.”

Kim also revealed that Kanye found the video just as hilarious as the rest of the world has, saying: “[Kanye] loves u guys! He laughed so hard at this.”