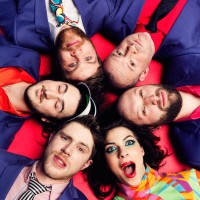 She may be best-known for her role as Osha in Game of Thrones, but super-stylish Natalia Tena is also the front-lady of Molotov Jukebox.

The flamboyant six-piece have built an inimitable reputation for their unique style. Weaving together various elements which range from gypsy to swing, through Latin soul, calypso and dubstep, their dedicated fan base has affectionately dubbed their music ‘Gypstep’.

We had a chat with Natalia and bandmate Sam Apley to find out all about our new favourite band.

Hello, how are you?
Natalia: Currently drinking liquorice tea with honey as I fucked my voice yesterday singing for eight hours getting us tight as a nun’s vagina for our album launch at Heaven on the 4th of April. We have an fantastic new drummer we are breaking in and a lot of new sensory ideas we want to get right for the night so the audience get a big package of woof.

You guys have a really unique sound – how would you describe it?
Natalia: Tropical Gypsy. Carnival flowers meet a London dustbin and fall in Love.

How did the band get together?
Natalia: Sex, wine and arguments distilled by an obsession with playing music.

Why are you called Molotov Jukebox?
Sam: We were playing poker with some members of a circus troupe backstage in a strange little tent at Glastonbury when their strong-midget (both a strong man and a midget…) became convinced I was cheating. In a rage he smashed the bottle of home-made vodka (to make a weapon) against the nearest solid object which turned out to be a record player. Anyway there must have been a candle or cigarette next to it because the whole lot suddenly went up in flames, providing us with both the perfect opportunity to escape the crazed midget and the ideal name for the new band we were formulating.

Tell us about your latest track, Neon Lights.
Natalia: Being a London band, we wanted to write an ode to our city but every time we tried it, something failed, it was either to trite, cliche or cheesy. One day, after I was reading Rivers of London by Ben Aaronovitch, a thought struck: why not make London a woman? Suddenly Sam, Adam and me, on my boat with wine in an evening pretty much nailed it in one sitting.

We love the video with actress Oona Chaplin [Natalia’s Game of Thrones co-star]. What was the idea behind the video?
Natalia: We knew we wanted my Cuban wife Oona to be in it, because to me she represents so many cultures and also she came up with the first ideas for the chorus. Other than that we were lost. I had the thought of asking Jon Drever, the amazing director I had just worked on Superbob with, if he would even be up for it and he literally saved our skins by saying yes. Not only that but the clever bastard came up with the whole idea and together with Grain Media, we got it done in time – thank you Jon.

What are you guys working on at the moment?
Natalia: Practising and rehearsing, rehearsing and practising. I think you can only get a song right once you start to hate it and then at some point in a gig it swings back to love.

We talk with a lot of bands that have members with acting careers too. Natalia, how do you juggle both?
Natalia: With the work and patience of my agents and our manager and forgiving production teams that will work around dates. You do have to make difficult choices which often involve tears, pacing, phone calls and for a moment you feel like all the balls have dropped but so far something or someone has picked them back up and handed them back encouragingly!

Will you be touring the UK?
Natalia: We are indeed! 2nd-6th of April we are doing a UK tour to celebrate our album release. Check out where on our Facebook page.

Check out the video for Neon Lights below, and click here to read Natalia’s top style tips.