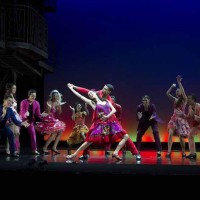 You’d be forgiven for assuming that a show which was so profoundly topical when it debuted in New York in 1957 would be out-dated and culturally irrelevant in 2014. However, as a glance through the crime section of any local newspaper will confirm, the themes of racial intolerance, violence and gang culture found within the narrative of Leonard Bernstein’s West Side Story are actually, at their core, as socially relevant now as they were when the show opened on Broadway over fifty years ago.

West Side Story tells the tale of bitter street-fighting between opposing white and Puerto Rican gangs, the Jets and the Sharks, on the tough streets of New York’s Lower West Side. When the leader of the Jets’ best friend secretly falls in love with the younger sister of the Sharks leader, gang tensions reach boiling point, with tragic consequences.

As part of its extensive UK tour, the show opened at The Playhouse in Edinburgh earlier this week and its short residency prompted the theatre to decorate its exterior in true New York fashion, complete with replica fire escapes, red fire hydrants and an iconic yellow cab.

Starring Katie Hall (The Phantom of the Opera, Les Miserables) as Maria and Louis Maskell (My Fair Lady) as Tony, the leads both managed to showcase their spectacular vocal abilities perfectly but seemed to struggle when it came to maintaining their Puerto Rican and New York accents. Djalenga Scott (Chicago, The Rocky Horror Show), on the other hand, was a complete joy to watch as firecracker Anita as she managed to convey the character’s sassy yet caring nature perfectly.

Throughout West Side Story, iconic songs such as I Feel Pretty, America and Maria are woven perfectly into the simple yet effective script, but it is the flawless and energetic dance numbers that take centre stage. Brutal stage-fighting is intertwined with elaborate dance routines, resulting in a stunning onstage spectacle: think Royal Ballet meets Training Day.
West Side Story is an engaging urban love story that everyone should see at least once.

West Side Story runs at The Edinburgh Playhouse until Saturday, 29th March. For tickets and more information, click here.