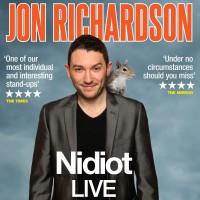 2013 British Comedy Award Best Male Comic nominee, star of ‘8 Out Of 10 Cats’, ‘8 Out Of 10 Cats Does Countdown’ and ‘Live At The Apollo’Jon Richardson is checking his tyre pressures, hoovering his floor mats and putting an emergency packed lunch in the boot of his car, ready to hit the stage again with his brand new DVD – JON RICHARDSON ‘NIDIOT’ LIVE.. Filmed at a sold out Hammersmith Apollo and released by Universal Pictures (UK) on Monday 1st December, ‘NIDIOT’ is the second DVD release from one of the UK’s brightest and most popular stand-up comedy and TV stars.

‘NIDIOT’ sees a more contemplative side of perennial singleton and OCD sufferer Jon. As he approaches 30, Jon is determined to become a more easygoing person for the sake of his friends and his future health as he starts to think about life ahead. His difficulty in meeting women (especially someone he really likes), the trauma of seeing his friends settling down and having children, or risking his life in a daredevil situation but then finding himself actually having a good time. Can a leopard (or indeed a NIDIOT) change his spots for the better?

He’s been most recently seen on our TV screens on the critically acclaimed Channel 4 series, ‘Jon Richardson Grows Up’ where he and fellow comic (and best friend) Matt Forde embark on a good old fashioned road trip around Britain. The pair travelled in a campervan across the UK meeting people from all walks of life who have unique views on what it means to be ”grown-up”.

In 2013 Jon appeared in his very own Channel 4 Documentary Jon Richardson: a Little Bit OCD, which subsequently won a Mind Media award. In 2012 he starred alongside fellow Cats captain Sean Lock, in the series Hillbilly Holiday (Channel 4) and in 2011 he released his debut autobiography, ‘ It’s Not Me It’s You’ (Harper Collins) to much critical acclaim.

Jon will continue to tour ‘NIDIOT’ throughout the UK this autumn. For full dates and listings information please go to: www.offthekerb.co.uk or www.jonrichardsoncomedy.com.

Jon Richardson’s DVD is out, 1st December by Universal Pictures UK but you can pre-order now from Amazon by clicking here.