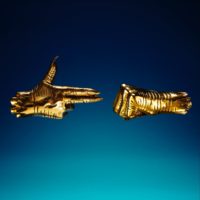 Expectations were naturally high for the third project by Run the Jewels after a solid debut in 2013 and an excellent sophomore record the following year. Run the Jewels 2 opened with Killer Mike’s aggressive shout ‘I’m gonna bang this bitch the fuck out’, that set the tone for the following 40 minutes of breathless, kinetic energy. In contrast, RTJ3 begins with the pensive ‘Down’, a reflection on the past, present, and future of the rap duo. The track retells how Killer Mike and El-P, two ‘birds with broken wings’, were able to conquer odds and opposition, and yet in their triumph they never lose sight of past struggles and the necessity to stay focused on the troubles ahead. Ending with the sounds of a blaring alarm as it segues into a series of bangers beginning with the lead single ‘Talk to Me’, ‘Down’ represents the calm before a storm of an album.

‘Talk to Me’ sets the tone fantastically, with the unlikely pairing of a Bible verse and a robotic announcement of ‘RTJ3, motherfuckers!’ heralding the return of both the political criticism and self-aware humour that has defined the Run the Jewels discography. Yet the album does not simply offer more of the same, but rather like RTJ2 before it continues to build upon the duo’s sound. As previously mentioned, the humour and playfulness of the previous albums is back, offering plenty of laugh-out-loud moments, but Mike and El know when it’s important to take a more serious tone. Their already strong bars are enhanced in their delivery, often endowed with anger or pathos.

The lyricism is also elevated by El-P’s production, which is some of the best work of his prolific career. Three albums into the RTJ project, El-P has clearly mastered the art of constructing a Run the Jewels song – ‘Legend Has It’ and ‘Panther Like a Panther’ are strong evidence of this. However, the album shines its brightest when it incorporates left-field elements into the tried-and-tested mix. See, for example, the dark and apocalyptic ‘Thieves!’ or the mournful wails of Kamasi Washington’s saxophone on ‘Thursday in the Danger Room.’ Washington’s crucial contribution to the track is one of the album’s well-chosen and complimentary guest features. Other notable contributions include a guest verse by Danny Brown, who sounds right at home on ‘Hey Kids’, and a surprise appearance by previous collaborator Zack de la Rocha of Rage Against the Machine on the closing track ‘A Report to Shareholders / Kill Your Masters.’ The final song represents a conclusion, not only to the album but also the entire arc of the RTJ trilogy, in which Mike and El reveal what has always been at the core of Run the Jewels: the hope and potential to overcome oppression and injustice that lies in the power of the music that brought the pair together.

Run the Jewels 3 may follow the conventions of the duo’s previous two albums in its title and album art, but this similarity does not signal creative stagnancy, it rather chronicles an extraordinary growth. The pistol and fist emblem, bare bones on the cover of their debut, is now plated in solid gold, a symbol of the ultimate perfection of the Run the Jewels sound that the album achieves.

Outstanding Tracks: ‘Thursday in the Danger Room’, ‘A Report to Shareholders / Kill Your Masters’, ‘Legend Has It’, ‘Hey Kids (Bumaye)’, ‘Talk to Me’