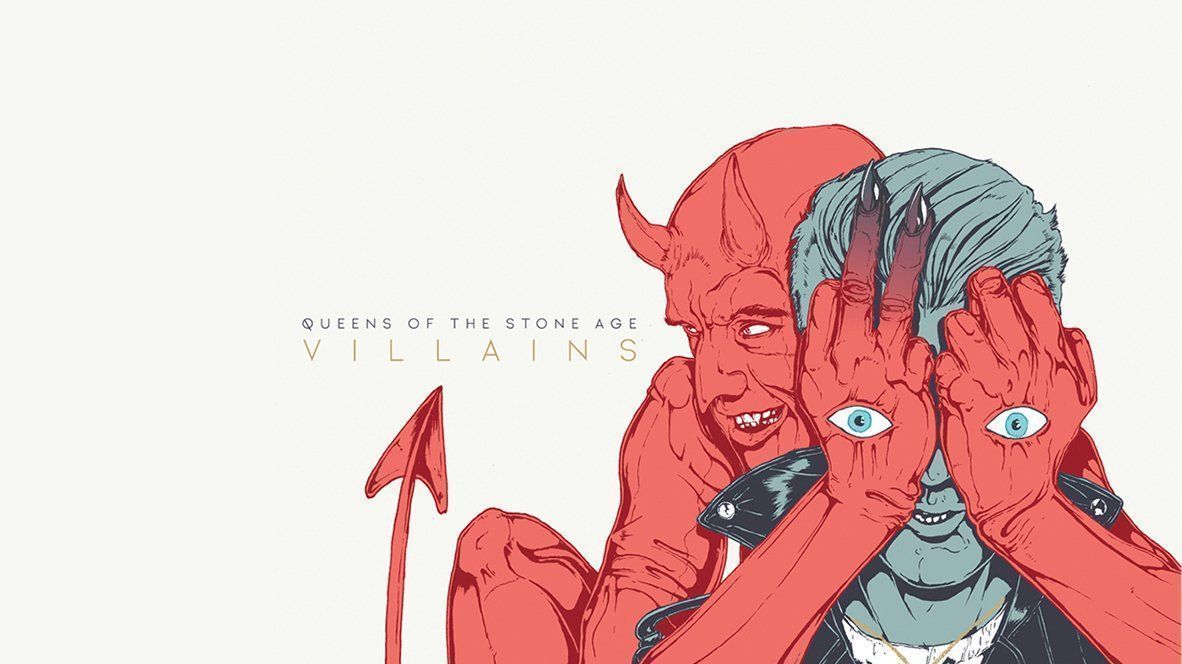 When conceptualising this year’s Gorillaz album, Humanz, Damon Albarn described music for ‘a party at the end of the world.’ Whether by chance or a simultaneous reflection of the cultural milieu, Albarn’s phrase seems like an apt description for Villains, the latest record by Queens of the Stone Age. Following their often melancholic, late-career masterpiece …Like Clockwork in 2013, QOTSA teamed with Mark Ronson, the man behind chart juggernaut ‘Uptown Funk.’ Ronson’s poppy sensibilities blend well and give more exposure to the grooviness that has always been a large part of the band’s sound.

Ronson’s production ties Villains together cohesively with little flourishes such as the brief, droning preview of ‘Fortress’ at the end of lead single, ‘The Way You Used to Do,’ yet all the while keeping listeners on their toes. This is established immediately with a bait-and-switch in the first two minutes of the album’s opening track, ‘Feet Don’t Fail Me.’ An exercise in pure titillation, the track’s slow build displays Morriconian precision and restraint, teasing the listener for the exact right duration of time before exploding cathartically into one of the most irresistibly danceable riffs of the year. Another chaotic moment comes with the impossible to keep up with ‘Head Like a Haunted House,’ which is especially blindsiding given its sequencing immediately following the quiet, sombre beauty of ‘Fortress.’

Lyrically, there are plenty of standout moments courtesy of frontman Josh Homme. Homme brings his usual dark wittiness to the album, not least on ‘Domesticated Animals,’ a track that exists in the realm of the carnivalesque, where ‘bewilderness’ has returned to ‘reclaim everything.’ Similar lyrical themes are also prominent in ‘Un-Reborn Again,’ with its depiction of a desperate search for eternal youth, and the penultimate ‘The Evil Has Landed,’ a song that constantly shifts and evolves as it moves through a ‘grand macabaret.’ The more introspective side of Homme’s lyricism is showcased on the grand closing track ‘Villains of Circumstance’ and the aforementioned ‘Fortress.’ Recalling the ballads of …Like Clockwork, ‘Fortress’ is a highlight of the album that trades the swagger of ‘The Way You Used to Do’ for sheer, honest vulnerability.

Seven albums deep into their discography, Queens of the Stone Age seem uninterested in deviating too far from their well-established sound, but add just enough into the mix to keep things fresh. The apocalyptic isn’t new thematic territory for the band, but they’ve never sounded quite so fun while exploring it. Villains is an embrace of chaos, a blissful descent into Armageddon.