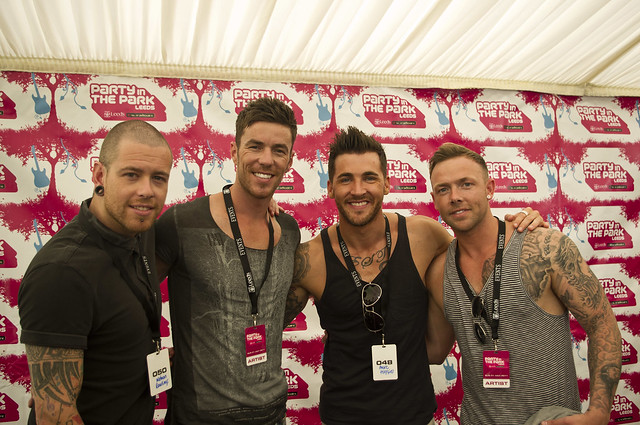 We were first introduced to Southampton “manband” The Reason 4 during the X Factor 2010.
They may not have made it through to finals of the show but if anything it’s worked in their favour – they’ve since bagged a record deal, their new single “Take It All” is out on the 7th August and they have an album out soon after.

I had a chat with Nathan, Scott, Mark and Glenn backstage at Party In The Park, Leeds.

Tell us about the new single.
Nathan: We’ve been friends for 13 years now, singing for about 10, and the song is about our journey. It’s taken us a long time to get where we are now. It’s about never giving up and always believing in yourself. If you can work hard enough and take the knock backs then you can achieve your dreams and be where we are.

Do you think it’s a good thing that you didn’t win the X Factor?
Scott: We do now.
Mark: At the time we were all crying [laughs].
Aww!
Scott: But now we’re glad. We got signed by Sony and signed by Far West Records, and we’ve co-written he whole album with some great people.

At this point a bee starts buzzing around us – no one is bothered by this apart from me (who screams, but hey, I’m a girl) and Mark, who dives out of the way.
Nathan: [Leaning into the dictaphone] Get this on record, Mark is scared of bees. That’s why he’s running around.

What do you think of the new X Factor judges?
Glenn: I think this year, they’ve got Gary Barlow and I think he’s going to be a bit like the new Simon [Cowell], and Tulisa [Contostavlos] as well which is going to freshen it up a bit, which will be good.
Mark: I think it might be a bit street with Kelly [Rowland] and Tulisa, something a bit different from the past few years.