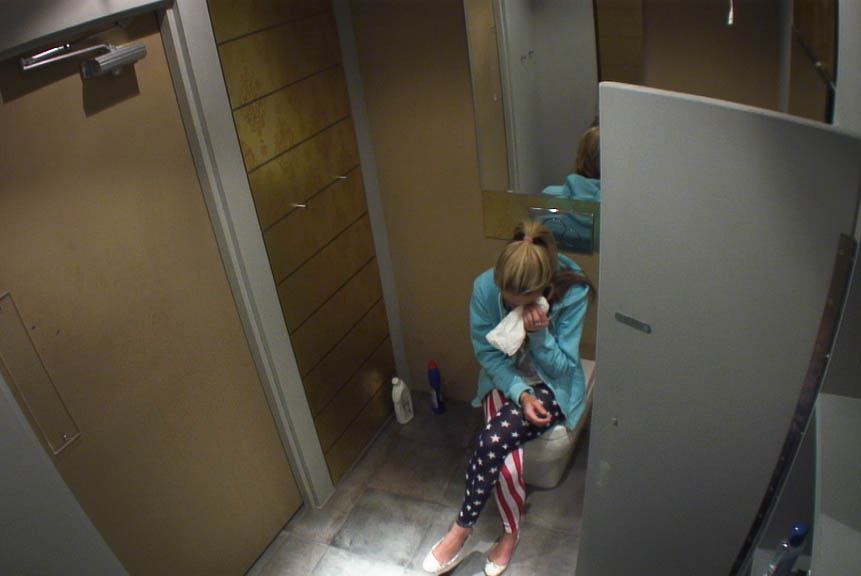 Day 14 in the Big Brother house…

9:29am
Housemates wake up feeling tense as today they will nominate for the second time. Benedict is in the garden working out. Yesterday as part of the bomb task Benedict lost the right to nominate. Some of the housemates are in the bedroom trying to wake a sleepy Scott. Big Brother announces to the house that nominations will start shortly. Deana is rummaging in the toilet supply cupboard in the bathroom while some of the boys are in the bathroom talking about nominations. They are unaware that Deana is in the cupboard. “Becky and Deana,” Arron exclaims and Conor silently motions to the bathroom. Luke A, Arron and Conor quietly giggle. On hearing her name, Deana moves her ear closer to the toilet door. “Awkward,” Luke A quips.

11:01am
Luke A, Lydia and Deana are at the dining table talking about Arron. Lydia tells them that Arron is to blame for some of the “problems” she has with other housemates. Big Brother calls Arron to the diary room. “I’m not a hater, I’m a nominator,” he rhymes while walking towards the diary room. “That’s the most intelligent thing he’s said,” Lydia exclaims loudly. In the diary room, Arron votes for Deana and Lydia. Caroline is next into the diary room and nominates Benedict and Lauren.

11:18am
Last night Benedict learnt that Arron thought he was boring following Lydia’s input. Lydia, Deana and Benedict are sitting at the table in the living area. Arron is preparing breakfast and Benedict asks him: “So, on a scale of one to ten, how boring do you find me?” Arron says that he doesn’t find Benedict boring, it was just certain parts of the conversation they were having. Arron says that the housemates who misinformed Benedict were “horrible two-faced b*****ds!” who took one word of Arron’s comments and blew it out of proportion. Benedict tells Arron that he will “try and be more aware, so I don’t bore you.” Arron urges him not to change as he “didn’t mean any harm,” with his comments and the two of them put their differences aside.

As Arron leaves he remarks: “I hope you enjoyed that Deana and Lydia,” who are still sat at the table. Lydia tells Arron that she was eating her breakfast so had no reason to leave and claims that she had stood up for Arron in the past. They have a heated exchange and Lydia tells him: “Don’t you dare turn on me!” Arron shrugs off the argument and jokes: “This house needs more laughter, don’t take it on your shoulders,” and claims that Lydia is making herself a “victim.” Lydia spits: “I’m not a victim of you, are you joking, I’ve been round the world more times and I’ve seen more than you … guess again little boy.” Arron laughs off her comments.

12:37pm
It’s all got a bit too much for Lydia who is crying in the bathroom. Arron is in the kitchen attempting to make amends with Benedict, he reveals that he thought it was Deana and Lydia who told him about the “boring” comment. Big Brother calls Scott to the diary room. He nominates Benedict and Lauren. Deana is next into the diary room and nominates Arron and Lauren.

Adam and Shievonne are dancing in the kitchen. Conor notices that housemates are eating pineapple and tells them that he’s never tasted the fruit before. The housemates urge him to have some. Conor eats a piece of pineapple and smiles. Lauren is next into the diary room and nominates Sara and Caroline. Next up is Becky who nominates Benedict and Lauren.

1:53pm
Some of the housemates are in the bedroom. Caroline asks Scott to sunbathe. He follows her reluctantly. When they have left Becky takes out her packet of biscuits and begins to eat. Lauren is lying on the bed opposite her and looks upset.
Luke A is in the diary room and nominates Luke S and Caroline.

Some of the housemates are in the kitchen. Luke S is cooking and Arron comments: “I love Luke’s face when he’s cooking.” He continues: “I love when he scratches his crotch area then picks up a spoon,” he laughs. Lydia apes Arron’s rap saying: “Don’t hate, appreciate!” as Luke S is called to the diary room. In the diary room, Luke S nominates Luke A and Deana. Shievonne is the next to nominate and names Benedict and Luke A.

2:47pm
Lauren is chatting to Deana by the pool, unaware that Deana nominated her two hours ago. Deana says that Lauren’s actions of going from “friend to friend” make their fellow housemates “paranoid.” Lauren seems upset and heads into the house. A short while later Lauren can be heard in the bathroom toilet loudly blowing her nose. Scott enters the bathroom and knocks on the toilet door. Lauren emerges looking sad and sits on the sofa in silence. Lydia, Sara and Deana are talking about Lauren. Lydia says that despite Deana and Sara nominating her, Lauren would have still faced the public vote. Becky joins Lauren and Scott in the bathroom. She hugs Lauren when she notices her tears. “I don’t understand why people don’t like me,” Lauren sobs and Becky tells her that there is “nothing” she can do about it. Becky adds: “I don’t wanna sound nasty but you need to stop moping about.” “It’s hard when nobody talks to you,” Lauren replies.

3:22pm
Conor is next to nominate; he chooses Deana and Lydia. Benedict is sunbathing in the garden and Lydia is perched on his sun lounger, talking about Deana. She brands Deana as “miserable and negative,” and claims that she needs to distance herself from her. Sara is next into the diary room and nominates Lauren and Benedict; Lydia nominates Arron and Deana and Adam nominates Becky and Ashleigh. With six votes each, Lauren and Benedict will face the public vote. Housemates Adam, Scott, Connor and Shievonne did not receive any nominations.

6:02pm
Caroline is up to mischief in the bedroom. Ashleigh is in the bed next to her and Caroline begs, “Let’s sunbathe.” Ashleigh asks her to wait for five minutes but Caroline mischievously squirts lotion up the length of Ashleigh’s leg. “F**k off,” Ashleigh mumbles. “It’s Benedict,” Caroline whispers while giggling. Arron and Luke A are in the kitchen and they discuss the argument Arron had earlier with Lydia. “I’m not here to make enemies,” confesses Arron. Luke A responds: “You’re a nice lad, I don’t wanna see you leave before your time.” Arron tells him that his pranks are mainly to relieve the “boredom” and keep himself “occupied” in the house. Luke A likens the house situation to “family” as you can’t choose them, likewise with housemates. They are distracted by Caroline and Ashleigh who are having a lotion-squirting play fight in the garden.

8:30pm
Big Brother has gathered housemates on the sofa for the results of this week’s nominations. As the names are announced Benedict nods as Lauren says: “I knew it.” They share a hug and housemates follow suit. Conor whispers: “I don’t know what to do cos I nominated both of them.” Luke A is at the smoking area and tells some of the housemates that he feels “so angry.” “How can people like Arron still be here…?”

Conor, Benedict, Lauren and Deana are discussing the announcement and Conor says that he is shocked. “Deana already told me that everyone decided it was me,” Lauren adds.

8:44pm
Lauren has come to talk to Big Brother and says that the group took a “dislike” to her as they had previously done with ex-housemate Chris. It has been 1 hour and 44 minutes since Big Brother announced this weeks nominations. Sara is upset in the garden. “I feel horrible,” she cries to Luke A who tells her that she will need to grow a “thicker skin.” In the living area, Conor tells some of the housemates that Lauren mentioned that “all of the girls nominated her.” He then reveals that Lydia and Deana were also the ones who told Benedict that Arron had called him boring. Luke S tells the group that sometimes he “likes” Lydia but no longer trusts her.

Lydia is talking to Benedict about nominations. She tells him that he is her “closest friend.” “My fiancé will be voting for you now because you’ve supported me,” she beams.

10:12pm
Benedict has come to terms with tonight’s nomination news. He tells Big Brother that he “expected” his result. He brands “four or five” of his housemates as “irritating, spoilt, brats.” “It’s like school but the parents never pick them up,” he quips. He adopts a stereotypical Essex accent and rants,” I’ve gone on Big Brother to get famous, become a presenter…”

Luke S is on the sofa. He tells Ashleigh that he is surprised that Deana isn’t up for the public vote and claims that Lydia has been “very sneaky.” “She’s trying to orchestrate stuff and manipulate situations,” he continues. In the garden Lydia asks Luke A: “Do you like this game?” He tells her that he’s been “honest” throughout. “I’ve been honest as long as the situation allows it,” Lydia muses. “We need to do Becky and someone else,” Lydia ends.

12:10am
Luke S and Ashleigh are getting steamy under the covers. Ashleigh pops her head up and alerts Luke S to a particular camera that is focused on them. Shievonne is in the diary room giving her take on this evening’s events. “I never thought Lauren would be up,” she laments. “She’s like a little doll to me, she’s smart, kind but her soul is troubled,” she adds. She says that Benedict has been putting on a “brave face,” but thinks that he may have seen it coming. Lydia and Deana are deep in conversation. “I’ve just realised this is a game,” she claims. “I don’t expect to win but let’s just make the most of it,” Deana muses.