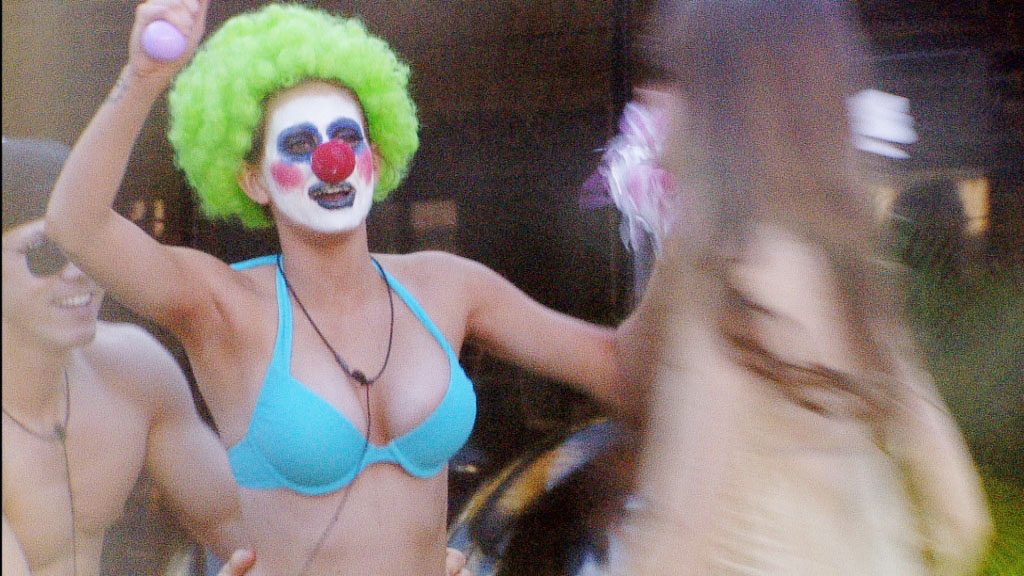 Day 48 in the Big Brother house…

9:31am
Housemates are reading the letters from home they received yesterday. However, only nine were delivered; as Ashleigh failed her part of the task, Deana was the unlucky housemate who did not receive a letter. Deana is still disappointed and has come to the diary room to talk to Big Brother. “I’m feeling sad, I’m missing my mum,” she weeps. Deana says that she was looking forward to getting a letter and now feels “let down.” Big Brother asks her if her fellow housemates have been “sensitive” to how she is feeling and Deana says they are aware that she is upset. “The friends that I have in here have been supportive, so I don’t need sympathy from anyone else,” she adds.

11:39am
Some of the housemates are in the garden. Ashleigh has come to speak with Big Brother. She is clearly upset and mentions her failure during yesterday’s task. She explains that although she and Deana don’t always get on, “everyone deserves a letter from home.” Ashleigh starts to cry. “I feel horrible; I just want her to have her letter. I don’t even want my letter,” she sobs. Big Brother asks Ashleigh if she has spoken to Deana about it. “I have, but I don’t think she really wants to speak to me,” she mutters.

The Lukes’ are still buzzing about receiving their letters. “It’s good to know that my parents are supporting me cos they didn’t know I was coming in,” confesses Luke A. Luke S agrees about support and mentions that he is missing a lot of family activity which always happens in the summer. “I’ve missed my nephew’s birthday,” he muses. Luke A asks him if he wants kids and Luke S replies: “I want four or five; I love ‘em!”

Ashleigh leaves the diary room and goes into the garden. Deana asks her how she is and Ashleigh tells her that she’s good. After a short silence Ashleigh asks Deana how she is feeling. Deana says she is fine adding: “You can feel okay about yesterday, I’m fine.” When Deana leaves, Sara sits at the smoking area and Ashleigh confesses to feeling “a bit down.” She says: “If I didn’t get my letter I would have left,” and tells Sara that Deana didn’t get her letter “all because of me.” Sara reassures her and says “You swear every second of the day, you tried your best, don’t put yourself down over it Ashleigh!”

1:02pm
Some of the housemates are enjoying the sun. Deana, Adam and Luke A are in the living area. Deana tells Adam he has a “weird look” in his eyes today, “I’ve not seen that look before,” she adds. “I think it’s his still-asleep face,” quips Luke A and Adam adds: “It so the f**k is.”

Ashleigh and Luke S are in the garden. She stares straight ahead as he mentions how nice the day is. “We should be plane spotting,” he suggests but Ashleigh looks indifferent. “I like your hair tied back,” Luke S comments. “Do ya, I think it looks horrible like this?” she quibbles while still looking straight ahead. They then sit in silence.

In the living room, Deana is watching the housemates in the garden and mentions that her group should “sort themselves out.” “I don’t’ care about that s**t anymore, everything happens for a reason,” ponders Luke A. Deana says she understands what he means but still thinks they should put “the best of ourselves forward.” “Yeah, but I don’t want to cheat,” Luke S replies adding: “I don’t’ want to do the whole pretend to be friends with someone for the sake of them not nominating me,” like some of their fellow housemates are doing. Deana and Adam agree.

1:24pm
Adam, Luke S and Conor are asking the age old question; cats or dogs. “I hate cats,” Luke S exclaims and Conor says that the sound of cats fighting “is the worst thing in the world.” Luke S reveals that he would like to own a “cute” dog. Adam tells him: “If I was gonna get a dog, I wouldn’t have no miniature, little f**king piece of s**t!”

Scott and Caroline have noticed certain changes in some of the housemates. They discuss the current harmony in the house amongst certain housemate and claim it’s due to the impending nominations. “Do they think it’s going to make a difference?” Scott quips. “I just don’t think they can help it,” replies Caroline. Scott claims that the housemates must all be “so competitive.” Caroline mentions a previous conversation she had with Adam where he claimed that she looked down on him for using the word toilet. “I personally wouldn’t use the word toilet, serviette, pardon and lounge but I wouldn’t care what anyone else says,” she remarks. Caroline says that Adam also mentioned that Caroline disapproved of the way he held his fork, “like a shovel.”

2:06pm
For today’s task housemates must work as a team to complete an obstacle course featuring two giant rotating turntables. They must finish the course in the fastest time possible in order to win a pool party with a barbeque, cocktails and music. Big Brother has stated that the housemates must complete the course in ten minutes or under to pass the task. The physical task has housemates falling and giggling all over the place. At the end of his stint Adam jokes: “A grown man with double-D titties bouncing in my TV, that’s f**ked up!”

3:43pm
Adam is asleep on the sofa. Ashleigh is in the bedroom with something on her mind. “Whoever left s**t marks in the toilet needs to get tissue and wipe it, that’s not normal!” Some of the housemates grimace and Luke A asks Ashleigh if she has asked Adam. Adam walks in and Ashleigh poses her question. “Yeah,” he grins.
4:32pm
Big Brother has gathered housemates on the sofa to reveal the results of today’s task. Housemates had to complete the course in 10 minutes but completed their attempt at Spin Break in 8.29 minutes. Housemates received a pool party with a BBQ, banging tunes and an array of inflatable pool toys.

4:57pm
Ashleigh has been called to the diary room. She tells Big Brother that she feels “a bit sad” today but is starting to feel better. Big Brother mentions her failure to secure Deana’s letter from home during yesterday’s task and asks her if she would like the chance to rectify the situation. “F**k off! Yeah I would, I would love that and Deana would love that!” she yells. Ashleigh must dress up as a clown and entertain her fellow Housemates in order to win the letter. Big Brother calls Sara to the diary room to help apply the appropriate make up. Therefore, Sara and Ashleigh are the only two housemates who know that Ashleigh’s task is for the letter.

Most of the housemates are in the garden and laugh as Ashleigh reveals her new look. Deana quietly asks Caroline why Ashleigh is made-up. “It’ will be because Ashleigh f**ked it up for you,” she guesses.

8:32pm
Big Brother has called all of the housemates to the sofas and announces that Ashleigh has passed the task to receive a “special reward,” Deana’s letter from home. Ashleigh tells her housemates: “I said I’d do anything, absolutely anything” to secure the letter for Deana. Deana asks Sara to collect the letter from the hatch and to read it out. After the letter reading Ashleigh and Deana share a hug and Ashleigh further apologises to her. Deana tells her that it’s okay adding: “How many times have I broken the rules?”

9:43pm
Caroline and Scott are enjoying an evening chat. Caroline exclaims: “I haven’t stopped eating for seven weeks!” Adam has come to the diary room and has nominations on his mind. “I’m not Conor, it’s not my favourite day,” he grins. He tells Big Brother “If things go as predicted I would be up now I guess.” He says that people could use the excuse of him leaving the toilet dirty, “or me being friends with Luke (A).”

In the bedroom, Ashleigh is talking to Deana about her letter and Deana says that she didn’t realise Ashleigh had been so upset about things. Deana tells her that everything is fine and cannot understand why she herself was so upset. “Small things blow up in my mind,” she confesses. She mentions that she is disappointed not to hear from her best friend in the letter and questions her support. Conor reminds housemates that they will have been in the house for two months tomorrow. Ashleigh turns the conversation back to the letter and admits that if it were her who had not received a letter, she would have “walked.”

10:52pm
Conor is in the diary room talking about nominations and says that Monday is his “favourite day.” He continues “Everyone is now best friends,” and mentions that come Monday “People will be staying away from each other.” Conor claims that Deana, Sara and “possibly Scott and possibly Becky” will nominate him as they are the housemates he has not got a real connection with.

Sara is gently broaching the subject of weight gain during a conversation with Caroline and Deana. She mentions that Caroline has gained weight on her legs and Caroline agrees. She tells her not to worry adding: “F**k it! You’re only gonna do this once.”

11:13pm
Deana, Luke A and Adam are considering divine intervention. The three housemates are at the sofas and Deana mentions that they need to do “serious prayers” to prolong their time in the house. “The only person more powerful than Big Brother is God” she smiles.

Scott and Caroline are in the bathroom, discussing which of their housemates they deem to be cool. Caroline thinks that Luke S fits the bill. “I think it would be very cool for them to be connected with me!” Scott smirks and tells Caroline that he and Luke S “repel each other.” Caroline tries to convince Scott of Luke S’ coolness but Scott still protests. “He’s like someone at Camp America, he’s so into himself, 100 percent confident of what he thinks and him being correct, it’s irritating when someone talks over me and bypasses me and dismisses me,” he fumes. Scott tells Caroline that she has one person in the house that “irritates” her and so does he, “It’s subconscious, not on purpose,” he adds.

11:58pm
Housemates are getting ready for bed. Deana is in the living area with Luke A and Adam with their heads bowed and hands together, ready to pray. “Please let tomorrow be good for me, Luke and Adam,” she starts. “Luke A,” Luke A corrects and they all laugh. “Let us soldiers survive this war,” Deana continues.

Ashleigh has come to the diary room and says that housemate it has been “a lovely day” but fears tomorrow will be different due to nominations.

In the living area Adam has taken the lead during prays adding: “We appreciate you, thank you for putting us here, give us courage and strength.” Deana interjects adding: “Either way I’m thankful,” and her Adam and Luke A begin to laugh. “Just forgive Deana for her selfish thinking,” prays Adam. “God, I’m not selfish,” giggles Deana as all three laugh.