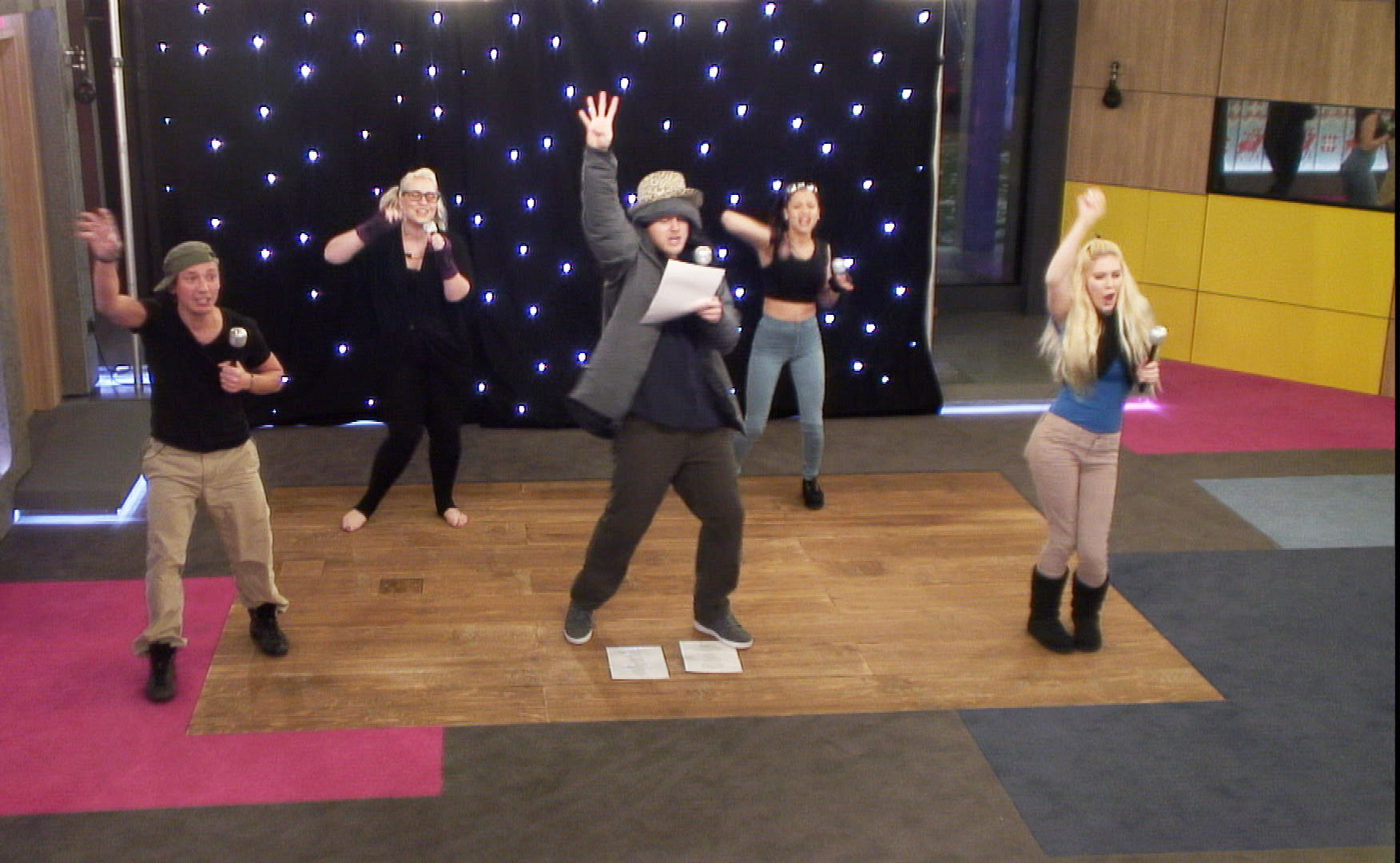 It’s a snowy morning in the house. Last night, Heidi & Spencer and Lacey found out that they would be joining Claire and Rylan facing the public vote; and Big Brother prevented Heidi & Spencer from accessing the basement while the rest of the house partied – which they weren’t happy about.

This morning, Heidi & Spencer have been in complete silence while the rest of the housemates have noticed snow outside. Rylan tells the housemates he is hangover. Claire mentions that she will stay away from the gym, “I need a day off,” she sighs. Rylan walks slowly through the house and Ryan offers to make him a cup of tea. “Yes please, with 7 sugars,” Rylan answers and enters the diary room.

Rylan tells Big Brother that he feels “pretty much s**t,” following last night’s party. He mentions how earlier Heidi and Spencer went to bed. “They never really get involved,” he says but says that doesn’t care as their actions no longer have “a negative impact” on the house. “I’m too hung over to worry,” he muses.

Spencer & Heidi have been awake for 1 hour and 33 minutes. They haven’t spoken a single word. In the garden, Rylan is quizzing Ryan about his wife “Sue” but Ryan corrects, his wife’s name is Alison, and she is a manicurist. “Who the f**k’s Sue?” exclaims Rylan at his mistake. He complains about the state of his nails and tells Ryan that they should get her to come into the house.

Heidi & Spencer exit the basement. Rylan bids them good morning; Heidi returns the greeting with a straight face while Spencer gives the thumbs up. The couple trade morning greetings with the rest of the housemates while heading towards the diary room. Razor and Tricia are talking about the couple, he can’t understand why they don’t’ seem to being enjoying life in the house. “It must be easier if you’ve got your partner in here?” he muses.

In the diary room, Big Brother notices that Spencer & Heidi are almost silent and asks how they are. “I’m not feeling very well,” Heidi replies and Spencer says that he is fine. Big Brother asks Heidi to elaborate: “My body feels really sick, I feel like I’m gonna throw up.” Big Brother asks Spencer why he has opted to give the silent treatment. “I’ve done my time; I’ll be out on Wednesday,” he replies. Meanwhile, housemates discuss the couple’s bad mood. “I don’t know what the f**k is up with them two,” remarks Rylan. In the diary room Big Brother asks Spencer & Heidi why they are barely speaking. “I don’t have the urge to say anything, we said we wanted to be evicted and we stayed, I say we wanna win, it’s just a form of reverse psychology,” he bemoans.

Most of the housemates are in the garden and Spencer & Heidi are sitting on the sofa. Housemates are playing in the snow. Heidi gripes, “I bet its fake snow,” as Spencer adds: “Big Brother has probably got a (snow) machine on the roof.” “I think everything’s fake,” Heidi adds.

Ryan is in the garden getting his first taste of British winter weather. Frankie is preparing lunch and calls over asks Spencer & Heidi if they would like some. Spencer is silent but gestures that they are okay and will not be eating. Spencer whispers to his wife, “He gets offended, I don’t’ wanna eat off those dirty ass dishes.” They retreat to the bathroom and continue badmouthing some of the housemates. “Some of those peoples’ voices are like nails on a chalk board to me,” Spencer snipes. Spencer continues to moan about the rest of the housemates’ cooking habits.

Lacey has been called to the diary room. As a special reward for passing the task a few days ago, Lacey has won a phone call from home. Her brother Daniel is on the line and tells her that their family is proud of her. Lacey cries and tells him, “I can’t do it anymore, there’s no-one here my age.” He brother assures her not to worry adding: “Bring it home for the Banghards!”

Tricia and Gillian are playing in the snow. Ryan surprises them by playfully throwing a snowball at them. A snow ball fight soon follows and other housemates join in. In the living room Heidi shouts: “Run Rylan, get that Toadface!” Soon after, Ryan has stripped to his shorts and is rolling in the snow, then quickly gets into the hot tub to warm up. “Oh my god, that Toad is crazy,” Heidi remarks.

Heidi is giving Spencer a shoulder rub on the sofa. Razor and Rylan are talking about the couple and mention that they are never apart. “I love my wife to bits but you’ve gotta have space,” Razor muses. Big Brother has called Spencer & Heidi to the diary room. Big Brother tells the couple that they will have to leave the basement and move back into the main house. This will also mean that Spencer & Heidi “fully participate,” in everything the house has to offer. The couple is reluctant but feels that they have no choice. “I don’t know why you’re asking us, you’re telling us what to do,” Spencer scolds. Big Brother asks if they had anything else to add. “It’s not appropriate language for television so no,” Spencer scoffs.

Spencer & Heidi are in the basement packing their bags to return to the main house. “I’m not gonna take the pictures of our dogs, I don’t want anyone seeing our dogs,” Heidi worries. Claire, Rylan, Tricia and Gillian are in the igloo. The other housemates are resting in the living area.

Razor is dozing on the sofa and Spencer asks him if he and Heidi can use the double bed that Razor has been sleeping in. Razor says that its fine as Spencer adds: “We’ve been booted out of the basement.” Heidi tells Spencer that they were lucky that Razor agreed. “That’s cos I got him while he was sleeping,” Spencer remarks.

5:45pm
Rylan is in an inquisitive mood and examines the vending machine in the living area. As he heads to the sofa, the vending machine springs to life and Rylan jumps as housemates get rush to join him. Big Vender introduces himself to the housemates. Big Vendor explains that he is yet to understand exactly The Definition of Celebrity and sets housemates a task to display their skills in a talent show with Rylan and Claire as team captains. Rylan’s team; Razor, Tricia, Ryan, and Gillian will perform the Steps hit Tragedy, while Claire’s team; Heidi, Spencer, Lacey, Frankie perform the S Club 7 hit Reach for the Stars.

7:10pm
Earlier today Big Vendor split the housemates into two groups. After a short rehearsal, each team gives a good performance as the rival team cheer them on. At the end of both performances, Big Vendor calculated that Rylan’s team gave the best performance. As a prize they can choose an item each from his shelves.
Razor chooses, football results, Tricia a red wine voucher, Ryan and mulled wine voucher, Gillian a craft beer and Rylan chooses a token for a burger meal for two. Big Brother will deliver their prizes later this evening.

10:20pm
Ryan is teaching Lacey how to juggle. Heidi & Spencer are drinking wine alone in the bedroom. Heidi is using a tea cup while Spencer is drinking straight out of the bottle. Frankie comes in and offers them a glass. “No, we’re American’s,” Spencer grins and asks Frankie if he is glad that they have returned to the house. “I don’t mind,” Frankie answers and leaves the room. “We don’t mind you either, you little punk,” Spencer scolds and says that Frankie was “already on my hate list.” They both agree that Gillian is the only one they get on with, “But she doesn’t really say anything,” he adds. They continue to bad mouth Frankie adding: “What a little d**k he is,” and Spencer pleads to go into the diary room to continue his rant, “While I’m hot.” Rylan and Razor are in the garden and notice Spencer drinking out of the bottle. Frankie enters the bedroom and offers the couple more wine and they decline. He then brings Spencer a glass to use instead of the bottle. Spencer declines but thanks him. As Frankie leaves Spencer tells his wife, “They’re their real selves for a second, then they change.”

11:04pm
Rylan’s team have received their rewards for winning their task, and are enjoying burgers and wine in the igloo. Spenser & Heidi join them and Rylan offers them some of his food and they accept. While the housemates tuck in Tricia is getting into something more comfortable.

In the garden Razor tells Lacey that he doesn’t like Spencer & Heidi but Lacey insists that they are “nice people.” Razor disagrees and thinks the couple is self obsessed.

11:55pm
Heidi & Spencer are talking to some of their housemates. They mention how great their life is in LA and say that they met when Heidi was 19 and Spencer was 22. “So this is forever and ever,” Gillian asks and they both agree as Heidi adds, “Above and beyond in heaven.” She adds, “Companies have spend millions trying to break us up,” and mentions that girls have been paid to approach Spencer in clubs.

Razor is in the diary room talking about Spencer & Heidi. He mentions that the couple is “obsessed with everything bad,” and yet, “(they have eaten) seven bags of crisps, but everything you do is bad for you, it’s all about them, now they’re drinking wine and eating burgers that I’ve put my hands on, yet they’re so health conscious freaks, I can’t make them out.”

00:36am
Spencer & Lacey are in the bathroom talking about the next eviction. Lacey says that she thinks that he and Heidi will be safe. “I think that Rylan and Claire will go home,” he adds and says that Lacey is “naïve” for thinking otherwise.

In the bedroom, Rylan tells Tricia that Spencer & Heidi a have been “too nice,” adding: “There could be a row coming on.” Tricia tells Razor and Rylan that it is difficult to know what has been show and that they could come of looking like the bad guys while Spencer and Heidi won’t. In the bathroom, Lacey tells Spencer that he and Heidi are “sweet, nice people but are very different from my world.”

01:14am
Rylan has comes to the diary room to talk to Big Brother about Spencer and Heidi. He mentions that the couple “fascinate” him then mentions how they react to the smallest of things. “Like when I sprayed my deodorant, oh God, they freaked out.”

Heidi enters the bedroom as Tricia and Spencer discuss Wednesday’s eviction. She tells them about how “super inappropriate” she thinks Lacey is by showering naked. “I don’t wanna be around it, not around me and my husband.”