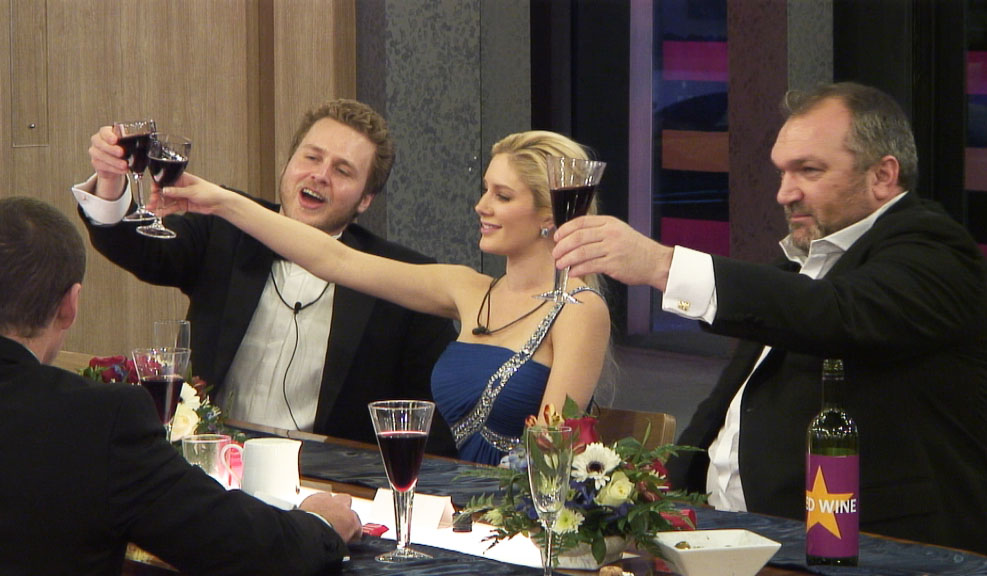 9.01pm
For their final supper, Big Brother is treating housemates to a very special meal. “Gosh I’m so glad we made it to the final, this is really fun,” Heidi tells them. “I feel like a winner already,” Claire adds. “You look like one baby doll,” Razor praises.

Big Brother has also provided them with some questions. Spencer ponders the first question “Have you made any real friends?” in the house. He smiles and tells his housemates that he has made “acquaintances” rather than “friends.” Claire’s question is about her “biggest ally” in the house and she reveals that it has been Rylan. “Even though he’s nasty to me all the time, I do love him,” she smiles, and then gives Rylan a kiss.

Some of the housemates then take turns to make a toast. Rylan starts, “Razor, I don’t have a dad on the outside and you’ve been that in here for me. I hope to take my dad from the inside and keep him on the outside,” he smiles. Razor is clearly moved adding: “Well done mate, love you.” Rylan continues and tells Speidi they have had “great times,” but have also clashed at times. “I think you’re a great couple and I think you’re made for each other,” he tells them. “I hope you’ll say hello if I passes you on the street,” he remarks. He then moves onto Claire, “I’ve looked up to you since I was a little girl, you are the Claire from Steps that I’ve always hoped you’d be.” Claire is up next and thanks her housemates for making it the “best experience” she thought it could be. She reveals: “I’ve not done many things on my own, I love the security of my house, and my husband, this has just proved that I can do things for myself,” she smiles.

Heidi is next to address her fellow housemates and says it‘s been both “the worst experience of my life and also one of the best.” She tells housemates that they all have “a place in her heart.” She begins to cry and tells them how much she loves and appreciates having Spencer with her, “He’s an amazing husband, he’s my heard my soul, my everything,” she weeps. “It’s made me a bigger, stronger, better person for it,” she ends. Spencer then takes his turn to make a toast. He reveals that he thought it would be fun to be the “villain” and “stir it up” in the house but admits that he does actually “in my true heart” care about his housemates. He reveals that he has never done a reality show as his true self, “It been very difficult for me to be awful, I just had to be the baddie, I had to step up, I (thought) can’t come all the way from America and be the good guy when that’s not what they cast me for.” Spencer cries and the housemates all rise and share a toast with him. Heidi is shocked, “I’ve never seen my husband cry before,” she smiles and is clearly moved. Razor toasts: “Even baddies cry.”

Razor and Rylan head to the smoking area and discuss Spencer’s toast and tears. “Do you think that was for votes or do you think he means it?” he questions and wonders whether Speidi’s tears were “all an act.” Rylan thinks it is good timing to have a breakdown “just before the final” while Razor is confused by Spencer’s description of the housemates as “acquaintances.” “But now he’s f**king crying over us,” he barks. Rylan quips: “Brilliant bit of acting though, Oscar.” “You’re so judgemental,” Razor laughs.

Heidi & Spencer, Rylan and Claire are at the dining table. Ryan tells Spencer that he made “A lovely speech.” “It was hard to be the bad guy this season, it’s usually a lot easier,” muses Spencer.