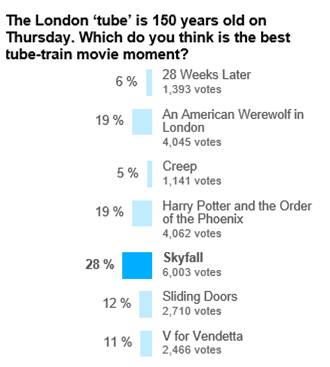 To celebrate the 150th anniversary of the London Underground, MSN UK asked users to vote for their favourite Tube-train movie moment of all time.

More than 21,000 people voted in the poll, and over 6,000 of them chose the dramatic moment when Bond baddie Raoul Silva (played by Javier Bardem) almost manages to crush our favourite super spy with a derailed District Line train in the latest Bond movie, Skyfall. Coincidentally, it was announced this morning that the most recent instalment of the Bond saga has been nominated for 8 BAFTA’s!

Harry Potter’s visit to Westminster tube station as he is accompanied by Arthur Weasley (Harry Potter and The Order of the Phoenix) also remains a favourite amongst UK film fans, scooping 4, 062 votes.
An American Werewolf in London managed third place with 4,045 votes – proving that the 1981 classic, in which a Werewolf stalks Londoners on the night train, still manages to impress audiences more than 30 years since its release!
Sliding Doors (2,710 votes), V for Vendetta (2,466 votes), 28 Weeks Later (1,393 votes) and Creep (1,141 votes) came fourth, fifth, sixth and seventh respectively.

Visit MSN UK to find out more about the anniversary of the London Underground.