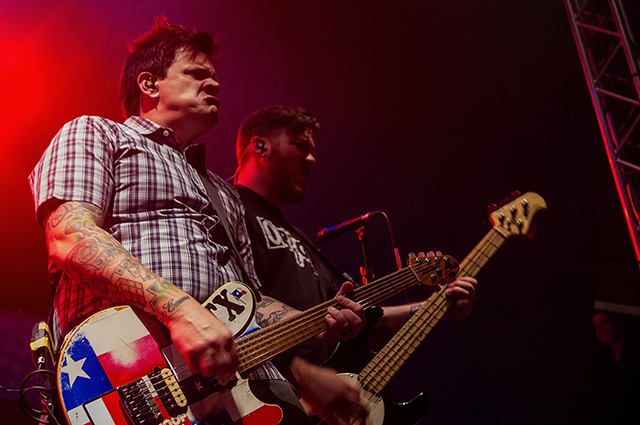 It feels like just yesterday we were buying their debut single and trying to find somewhere in the UK to buy tartan pants to fit our 14-year-old butts.

My, they grow up fast these days…

Today is the 19th birthday of our beloved Bowling For Soup. If they were a human instead of a band they’d probably partying hard and getting pissed… hmm, so things wouldn’t be too different.

In this day and age, 19 years is an impressive amount of time to stay together without the excuse that you’re doing it for the kids.

1. Girl All The Bad Guys Want – It was this single that kicked off our love affair with BFS. In 2002 pop-punk was infecting teenagers all over the UK. We were dying our hair, having bits of metal shoved through our skin and getting in trouble at school for covering our textbooks with cheeky lyrics. The Girl All The Bad Guys Want video epitomised all things pop-punk and it’s a cracking tune so it’s no surprise it bagged them a Grammy nomination.

2. They write great ballads – Yes, BFS are pop-punk legends, but when they do slower tunes, my gosh, they do ’em good. We love their fun, punky stuff with epic choruses and hilarious lyrics but to go from that to writing such beautiful ballads so effortlessly is truly the sign of professionals. When We Die, Why Don’t I Miss You and Turbulence are particularly brilliant.

3. Their tunes are timeless – It doesn’t matter if you’re listening to Drunk Enough to Dance or Fishin’ for Woos, BFS make music that stands the test of time, while still managing to change and grow with the industry. Their songs will be around forever.

4. They make incredible music videos – A wonderful song is only half the battle for BFS, who throw equally as much effort into their music videos as they do their songs. Take the videos for Emily, Highschool Never Ends, 1985 and My Wena – they’re hilarious, they’re relevant to the song and they’re always original.

5. Epic live shows – I’ve said it before and I’ll say it again… Bowling For Soup are my favourite band to see live. You just get so much for the price of your ticket: their awesome music, hilarious banter between songs and show that feels tailor made for you, you never feel like they’re going out and doing the same old thing every night of their tour. They’re just fantastic entertainers. A personal highlight is their Yorkshire chant from their 2012 tour.

6. They clearly love their fans – Bowling For Soup are a fans’ band. If you want to do well in this business you’ve got to make time for the people who pay your wages and BFS get that. You can tell they’re going out of their way to make their fans happy, and they’ve always got time for meet and greets.

7. Turbulence – Turbulence is, in my opinion, BFS’ best ballad. It’s just such a beautiful song, it’s got a cute video and wonderful lyrics.

9. My Wena – Probably one of my favourite songs in the history of the world, My Wena is just so clever. The lyrics are hilarious, the video is hysterical and by the time you’ve watch the whole thing you realise Jaret is singing about his dog and you feel like a pervert.

10. They’re so funny – I’ve been to see comedians and laughed less than I have at a BFS show. Their live shows are funny, their music is full of humour and I’ve never left an interview without a smile on my face.

11. They like a drink – BFS know how to party, and when they’re here in the UK they’ve actually invented their own drink called the Delicious Gary – we like it ’cause it’s pink.

12. They’re so versatile – You wouldn’t expect their wonderful brand of pop-punk to work acoustically, but it really does. We adore BFS’ acoustic shows because it just feels like a bunch of mates jamming in your living room… if your mates happen to be incredibly talented and hilarious.

13. They’ve introduced us to other musicians – We’re fairly sure we would have come across these super talented individuals eventually, but it’s thanks to BFS that the following entered our lives when they did (and we couldn’t be more grateful): Patent Pending, The Dollyrots, Ryan Hamilton. Thank you, BFS!

14. They’re philanthropists – Not only do BFS give back to their fans, they give back to the whole damn world. In the midst of a natural disaster they’re one of the first to make a t-shirt or put on a show, with the proceeds going to charity.

15. They made us like a cover more than the original – Are we allowed to say that? That’s like saying you like a remake better than an original movie, it’s unthinkable… and yet we think it. BFS covered Fountains of Wayne’s tune Stacy’s Mom because people often made the mistake that it was a BFS song to being with. We like the cover more, sorry.

16. They’ve made awesome babies – The boys of BFS have worked on solo projects, side projects and they’ve made whole new bands with cool new peeps. We think Jarinus is wonderful, we love Erik Chandler and the Mulberry Street Socialites and of course the epic People On Vacation have a special place in our hearts.

17. They’re family friendly – Yes, they swear, yes they can be dirty, but they’re still cool for the kids. They co-wrote and sang the theme song for Disney’s Phineas and Ferb, Today Is Gonna Be A Great Day, and starred in an episode, which not only makes them family friendly, but it means we can legitimately like cartoons. Yey!

18. They were responsible for The Get Happy Tour… – Possibly the greatest effing tour ever. On the first tour we had Bowling For Soup, Wheatus, Son of Dork and Army of Freshmen, and then later in the year we got Bowling for Soup, Bloodhound Gang, Zebrahead and Army of Freshmen. Good bands, good times.

19. They’re leaving us… but they’re saying goodbye – BFS have announced that their forthcoming UK tour will be their last, but at least they’ve warned us, not like these bands who just never come back and leave us feeling miserable. We’re glad we’re going to get chance to say goodbye, and we’ll certainly enjoy every last moment of their UK tour. Click here for tickets.