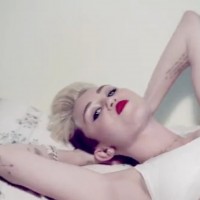 The clever, clever people have removed the music from the We Can’t Stop video, replacing it with more true to life sound effects.

Despite being exactly what you’d expect to hear, the creepy sounds combined with the random imagery can only be described as disturbing. When I watched it for the first time I expected a call afterwards saying: “you will die in seven days.”

With music it’s a montage of a bunch of good time guys and gals partying, without it’s like a nightmare or something you’d expect to see in The Ring.

The funny video also highlights just how awkward the video actually is without music.