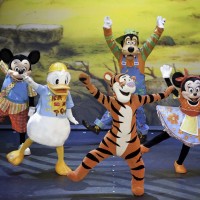 If Walt Disney World is the happiest place on earth, Braehead Arena sure came a close second on Friday afternoon when hundreds of beaming children ascended on the venue to see their favourite Disney characters brought to life in Disney Live! Mickey’s Rockin’ Roadshow.

With most of them dressed in their finest Disney attire (the number of Buzz Lightyear and Cinderella costumes being modelled was astounding), they enthusiastically welcomed Mickey and his trusty pals to the stage. Whilst Minnie, Donald and Goofy were all featured, the fact Pluto was noticeably missing from the ‘Fab 5’ line up left many wondering why he’d been left out in the dog house. Too much mischief for Mickey to handle on the road, perhaps?

The plot of Mickey’s Rockin’ Roadshow was remarkably easy to follow, even for those too young or too cool to be familiar with the colourful characters on stage, and centred on Mickey and his friends setting off on fun-filled a road trip to find contestants for their upcoming talent show. Notable crowd-pleasing moments included the fun and colourful Toy Story hoedown section in which Buzz, Jessie and Woody danced and lashed their way around the stage and Cinderella’s ugly sisters desperate to sell the ever-fashionable Minnie Mouse a new pair of shoes.

However, as fun and plausible as the thin plot was, the kids in the audience were more interested in dancing and singing along with their favourite Disney characters than anything else. It’s fortunate, then, that the show’s enthusiastic host actively encouraged children of all ages to scream, shout, dance and get involved. The notoriously rebellious Tigger managed to inspire the venue to erupt into a mini-rave by encouraging the wide-eyed youngsters get their bounce on with him to the hip-hop inspired Bounce, Bounce.

A fun family show which will leave you humming along to The Mickey Mouse Bus song for weeks on end!