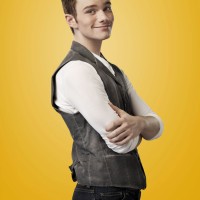 Chris Colfer has revealed that Adam Lambert will be playing his nemesis in Glee.

We were excited to find out that Flecking favourite, Adam Lambert, would be making his debut on the all singing, all dancing Fox show – which airs on Sky1 here in the UK. We’re even more excited now that we know Adam will be going up against Chris Colfer’s character, Kurt.

“He’s going to play my nemesis,” Chris said of Adam during an interview on Live With Kelly And Michael.

It doesn’t sound like Chris is worried about his character going head to head with the sexy singer though.

“I just want to see Kurt be mean,” he revealed.

You can catch the next episode of Glee on Sky1, Friday 9 at 1pm.