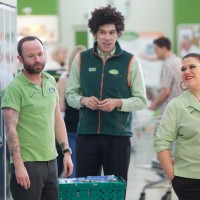 The third series of Trollied starts on Sky 1 this month.

The hit Sky 1 comedy, which follows the everyday lives of the staff at budget supermarket Valco, will be kicking off the third season August 22.

With new cast members and old, hilarious favourites, the new season is one not to be missed. If you haven’t watched Trollied yet then you still have time to catch up – click here

to pick up series 1 on DVD and here

Tune into Sky 1 on August 22 to catch Trollied season 3.