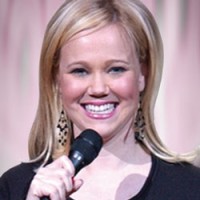 Caroline Rhea may be best-known for having played ditzy Aunt Hilda on Sabrina the Teenage Witch, but she’s also many spent years making quite the name for herself on the live comedy circuit.

Returning to The Gilded Balloon for her annual Fringe residency, Rhea managed to keep her audience giggling throughout with her open personality and chatty manner. There was plenty of audience interaction (with Caroline even handing out edible gifts to those in the front few rows) and Rhea was happy to indulge fans of Sabrina (of which there were many!) by telling them entertaining stories about her time on the hit show.

Other hot topics up for discussion included her experience as a fairly new parent, a disappointing visit to Edinburgh Zoo and her recollection of meeting Bill Clinton.

Though the show lacked any real theme or narrative and came across as a little too scripted at times, Rhea’s infectious enthusiasm translated over to the audience who seemed to love every second. A likeable and relatable comedian with a promising future ahead of her.