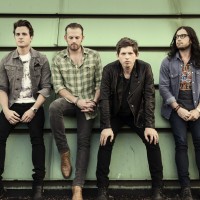 Trashing their way through a set list that included a varied and unpredictable mix of new songs, radio anthems and old classics, the popular indie band managed to pull off pleasing both the die-hard and casual fans in the audience in astonishingly equal measure. Highlights included True Love Way, Use Somebody, The Bucket and, of course, Sex on Fire – which cause the audience to erupt into a festival-like frenzy.

True to form, their notoriously quiet lead singer (Caleb Followill) didn’t partake in much audience interaction and instead let the music and deafening cheers from the crowd take centre stage throughout.

Kings of Leon have set the bar high for Summer Sessions 2013 and are going to be a tough act for fellow performers Eminem, Tinie Tempah and Avicii to follow….