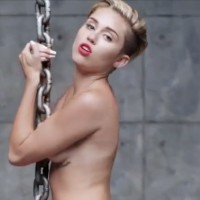 They’re both female, they’re both singers and they both embrace controversy… Lady Gaga and Miley Cyrus have a lot in common.

So it’s only natural that in the midst of back to back criticism of her racy work, Gaga has jumped to the defence of Miley Cyrus and her new music video Wrecking Ball, which sees a nudey Miley swinging on a chain.

“I think everybody needs to lighten up and leave her alone,” Gaga said. “It’s pop music, and everybody’s entitled to their own artistic expression and if you have a problem with that, just change the channel. I don’t understand the incessant need to go on and on about hating things.”

“She’s 20 years old, and if anything, I give her props because she’s growing up in front of the entire world and maybe she’s not so happy with the things that she did in her career when she was younger and she wants to be free. Let her do what she wants.”

And just in case that didn’t shock you, here’s what she had to say about lady-loving.

“I’ve taken a few dips in the lady pond – I like girls. I know people think I just say things to be shocking but I like p*ssy. It just depends whose p*ssy it is.”