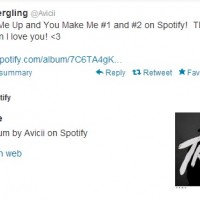 Avicii has teamed up with Flecking favourite Adam Lambert and Nile Rodgers for a new tune, which has premiered online.

The DJ has released Lay Me Down, which will be on debut album True, online for fans to listen to ahead of the release on 17 September.

Nile Rodgers recently spoke about the decision to work with Adam Lambert. He said, “I need someone to do a lead vocal so I call Adam Lambert.”

Avicii added, “I really fell in love with his voice. He just captured something on that first take.”