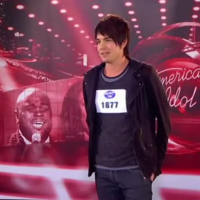 When we saw all the tweets about it being five years since Adam Lambert auditioned for American Idol, we couldn’t believe our eyes.

We were a little late to the Lambert loving party here in the UK (something to do with the fact that he is massively under appreciated here), but in August 2010 we happened upon a video of him locking lips with members of the audience at one of his gigs, and after checking out his music our obsession began.

In honour of this five year milestone, since Adam wowed everyone with his rendition of Bohemian Rhapsody, we have decided to post the five reasons why we’re so glad he turned up to that audition.

1. He gives TV talent show stars a good name – The American Idols and X Factors of the world do not have a very good reputation these days. Some think they wrongly dominate the music industry, there are always going to be people who don’t believe the contestants deserve their fame because they don’t work for it and some blindly hate such shows because they hate Simon Cowell. Whatever the reason these shows get a bad rep, Adam shows just how vital they are for discovering incredible talent – because they do bring us super-talented individuals like Adam, and for that we’re thankful.

2. He probably has one of the greatest voices we’ve ever heard – If I asked everyone who had heard Adam sing to make a list of people with better voices, I think they’d struggle. Adam has such an incredible voice, suited to massive pop his and beautiful ballads alike. It’s that sort of spine-tingling, goosebumps all over your body, flawless voice that leaves you thinking “wow” and needing a stiff drink.

3. He’s used his fame for good – Adam Lambert has done so much to help the world with his celebrity status. If he hadn’t found fame, there are several good causes who would have missed out on his generosity. Whether he’s bringing water to people in developing countries or campaigning for gay rights, the world is a better place for Adam being in it.

4. He’s given us some incredible songs – I cannot imagine living my life without any of Adam’s albums. I always find that he has something to suit my mood, whether I’m having a bad day or going for a run. You’ve got incredible ballads like Whataya Want From Me, sexy tunes like Fever and the likes of Never Close Our Eyes that makes you want to get up and shake your ass every time you hear it. We thank you, Adam Lambert.

5. He loves us too – We’ve been in love with Adam for years now, and we’re always keen to spread the word about him, so it’s nice to know he appreciates it. We were delighted when he said that he loves us at Flecking Records during an interview, but it’s more than that. You can just tell that Adam adores every last one of his fans. He works so hard for them, he always has time for them and there’s a mutual respect that you don’t see with all musicians.

Leave us a comment below letting us know the five reasons why you love the lovely Mr Lambert.