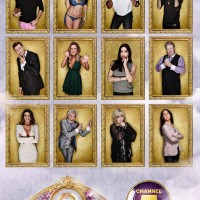 A new year, a new Celebrity Big Brother for us to enjoy.

The housemates have gone in, and we’ve got the usual wonderful selection of celebs from all corners of show business.

So, who have we got?

CASEY BATCHELOR
Who? Casey Bachelor is a British Glamour Model most known for her 34GGs.

DAPPY
Who? Costadinos Contostavlos, known as Dappy, is a British rapper of Greek descent. Dappy formed NDubz with friend, Fazer, and his cousin Tulisa when they were 13. The controversial singer is known for his catchphrase ‘Na Na Niii’ and wearing woollen hats that have been coined ‘Dappy hats’. Dappy has also had his fair share of run ins with the law.

EVANDER HOLYFIELD
Who? Often referred to as ‘The Real Deal’ Evander is known for being a four-time world heavyweight boxing champion. On 28th during the famous ‘Bite Fight’ at the MGM Grand Las Vegas June 1997, Mike Tyson bit off part of Evander’s ear.

JASMINE WALTZ
Who? Jasmine Waltz was born in Las Vegas, Nevada. She has appeared in films and TV shows such as Pledge This alongside Paris Hilton and Rules of Engagement; but is best known for being a fixture on the celebrity dating circuit. Her exes include Ryan Seacrest, Jesse McCartney, Chris Pine and David Arquette.

JIM DAVIDSON OBE
Who? Controversial comedian, Jim Davidson has been in showbiz since getting his big break in New Faces in 1976. As well as gigging around the UK doing stand-up, he dominated the small screen throughout the 80s and 90s, presenting What Happened Next, The Jim Davidson Show and The Generation Game.

LEE RYAN
Who? Lee Ryan is an English singer-songwriter and actor. He is best known for being a member of the British boy band Blue. The band have sold over 14 million records worldwide.

LINDA NOLAN
Who? Nicknamed the ‘Naughty Nolan’ due to her risqué photo shoots Linda Nolan has been singing since the age of 4 when she hit stardom with her sisters in the family act, The Nolans. In 1974, The Nolans made their television debut on Cliff Richard’s TV show, singing “Stuck on You”.

LIONEL BLAIR
Who? Lionel Blair is a British TV personality and is best known as a panellist on Give Us A Clue. When asked about his age, he says, “I say I am 59 plus VAT.”

LIZ JONES
Who? Liz Jones is a British journalist. A former editor of Marie Claire, she has been on the staff of The Sunday Times and the Evening Standard. Jones currently writes columns for the Daily Mail and The Mail on Sunday.

LUISA ZISSMAN
Who? Business woman Luisa is best known for being the runner up on BBC1’s The Apprentice. She describes herself as having the energy of a Duracell bunny, sex appeal of Jessica Rabbit and a brain like Einstein. The saucy mother-of-one speaks openly about being a regular at sex parties run by the company Killing Kittens.

OLLIE LOCKE
Who? Ollie Locke is best known for being on BAFTA award winning Structured Reality Show Made in Chelsea. The reality star came out as bisexual in Series One of the show, dating mainly women including Chloe Green, daughter of Sir Phillip Green and the heir to the Topshop fortune.

SAM FAIERS
Who? Sam Faiers shot to fame as one of the original stars of reality TV show The Only Way Is Essex, memorably getting a vajazzle and having an on/off relationship with Joey Essex.