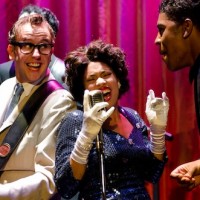 The Buddy Holly Story may now just be one of several “jukebox musicals” touring the country on a conveyer belt-like basis but, in actuality, it was one of the first West End shows to help establish the popular sub-genre that has made music theatre so accessible for casual fans. It seems somewhat fitting that the musical based on the life and career of Holly, the unlikely musical trailblazer who set the tone for what rock ‘n’ roll was to become, would play a part in revolutionising musical theatre.

The Buddy Holly Story invites audience members on a feel-good, hit-filled journey through the short life and career of the late singer-songwriter. Whilst it does provide a small, diluted insight into his sudden rise to fame, the musical merely touches on his personal life and, instead, focuses primarily on his impressive back-catalogue. Placing emphasis on the music is not necessarily a bad thing, though, as Holly’s short life was fairly non-dramatic, save for his shocking and untimely death. The lack of extensive dialogue also saved the audience from having to spend too much time listening to many of the cast member’s questionable Texan accents, which proved to be rather irritating and distracting as the show progressed.

The star of the show was undoubtedly leading man Glen Joseph (he alternates nights spent playing Buddy with Roger Rowley), who has the vocals, mannerisms and looks so spot-on that, during the last few scenes, you’d be forgiven for momentarily believing you’d been transported back to the 1959 to watch the man himself perform. His sheer enthusiasm and magnetic charm was infectious and had the audience up on their feet, singing along to classic Fifties hits such as Rave On and Johnny B Goode.

A fun and nostalgic musical for anyone drawn to the vibrant nature of early rock and roll. Buddy runs at the King’s Theatre in Edinburgh until Saturday. For tickets and more information, visit www.edtheatres.com