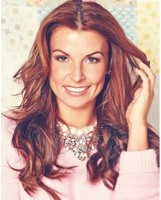 Coleen Rooney, the official ambassador of the Tesco Mum of the Year Awards 2014, will host an interactive Twitter party @TescoLiving, on Friday 21st March, between 12.45pm and 1.45pm.

Mum of two, Coleen will be taking part in a fun, fast-paced chat, whereby fans can ask questions direct on Twitter about her being mum and being part of the awards. Coleen will respond live, during the hour-long virtual event, to as many people as possible, using the hashtag #MumoftheYear.

2014 is the ninth year of the Tesco Mum of the Year Awards. The star-studded ceremony will take place at London’s iconic hotel, The Savoy, on Sunday 23rd March. Attracting a host of celebrity guests, including Coleen, the awards celebrate inspirational mums from all over the UK, who have made a difference to the lives of others.

To join the event, simply follow @TescoLiving on Twitter and start sending your questions during the party on Friday 21st March, using #MumoftheYear. For more information on the Tesco Mum of the Year Awards, please visit www.tesco.com/living (and click on the Mum of the Year section).

The Tesco Mum of the Year Awards will be screened on Channel 5 on Mother’s Day, Sunday 30 March 2013.