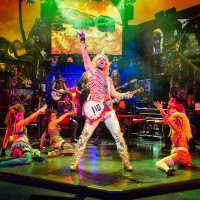 There’s no denying that, as a musical theatre production, Rock of Ages is as cheesy and predictable as they come. With its ‘celebrity’ cast (ex-Footballers’ Wives actor Ben Richards and ex-Hear’Say singer Noel Sullivan have been heavily promoted as being in the cast), pop-rock score and thin plot about heartless businessmen pushing independent clubs on Hollywood’s Sunset Strip out of business in the Eighties, the show seemed destined to be little more than yet another tedious touring musical. However, what sets Rock of Ages apart from its countless jukebox musical counterparts is the way in which the writers and actors use the shows silliness to their advantage, revelling in the cheese at every opportunity, to the delight of the audience.

Stephen Rahman-Hughes was particularly fantastic as narrator Lonny, commanding laugh after laugh from the audience throughout – the scene in which he and independent club owner Dennis Dupree (portrayed by former Neighbours actor Daniel Fletcher) discover their mutual love for one another, set to Foreigner’s I Want to Know What Love Is, had the audience in stitches.

Noel Sullivan was also surprisingly impressive as the loveable lead Drew, a club worker who dreams of fronting his own glam-rock band and falls in love with aspiring actress-turned-stripper Sherrie Christian (Cordelia Farnworth). With a flawless rock voice that could rival the greats, it’s hard to believe he used to be a puppet in one of pop’s most infamous bands.

Of course, one of the biggest draws to Rock of Ages is the music. Featuring hits from Bon Jovi, Journey, Twister Sister and Europe, the show and cast definitely delivered, turning in energetic and passionate performances aplenty. With riffs even bigger than the wigs, Rock of Ages promises to be a fun night of wild escapism.

Rock of Ages runs at The Playhouse until Saturday, after which it will embark on a UK tour. Fir tour dates and ticket information, click here.