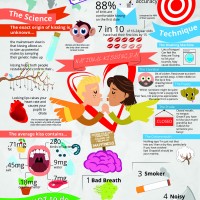 Today is National Kissing Day, the time to celebrate the art of kissing in all its glory and encourage people to indulge in a little more lip smacking action!

Whether it’s smooching your partner, a peck on the cheek to greet a friend or family member, or a flirty kiss blown across the room to someone, it’s something you’ll be seeing a lot more of today!

To mark this widely celebrated day, kissingday.co.uk has taken a comprehensive look at the finer details of lip locking and as it turns out, we Brits love a good smooch! Did you know that 88% of us are comfortable kissing on a first date? Or that 70% of 16-24’s have had their first kiss by the age of 15?

According to recent studies, couples who kiss regularly are said to live five years longer than those who don’t, and ladies, ‘French kissing’ exercises 29 muscles in the face which could keep you looking younger and happier for longer…

In fact, kissing, or ‘passionate kissing’ at least, sets off a great deal of physiological processes improving our happiness and general well-being. First of all, it decreases the stress hormone known as cortisol; secondly, it works wonders in lowering levels of anxiety, resulting in much of the same effect as meditation.

On top of this, kissing makes our hearts beat faster which allows more oxygen to reach the brain, all the while releasing endorphins that subsequently bring on waves of euphoria. Ever heard of the ‘love hormone’? Well it exists, its scientific name is ‘Oxytocin’ (also commonly known as the ‘cuddle chemical’) and yes, it’s released while kissing, making us literally feel warm and fuzzy inside.

Kissingday.co.uk also conducted an online poll for National Kissing day, asking the British public to vote for who they think is the most kissable male and female British celebrities! The winners were David Beckham, followed narrowly by Tom Hardy, and Holly Willoughby for the girls with Michelle Keegan coming in at a close second.

Now in its 10th year running, National Kissing Day is set to be bigger than ever this year. Ambassador Rosie Shipp tells us why it’s so significant.

“While kissing is a pretty integral part of any romantic relationship, we also kiss our friends, our family, our pets, athletes kiss their trophies, you get the idea! It’s a universal sign of love and affection, so why not dedicate a day to celebrate it. If every day was National Kissing Day, wouldn’t the world be a much more peaceful place? We’re encouraging all of you to pucker up for the day and see how good it makes you feel!”