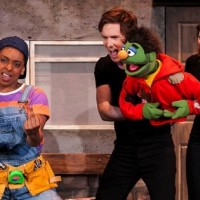 Whilst the furried cast of Avenue Q could easily be mistaken for cheery cousins of Elmo or The Cookie Monster, their foul language, excessive drinking and sexual escapades throughout the show definitely prove that they are anything but. Sesame Street they aren’t. But hilarious? They sure are!

Set in a fictional rundown borough of New York City, the comedic musical tells the story of Princeton (Tom Steedon), a disillusioned college graduate as he desperately tries to find his purpose in life.

The witty dialogue consistently elicited squeals and laughter from the audience, whilst the story itself is heart-warming and incredibly clever at its core. Themes of racism, sexuality and self-worth are all explored in way that is refreshingly relatable and entertaining at the same time.

The onstage puppeteers proved themselves to be incredibly talented, throwing themselves into their roles and bringing their vibrant characters to life without ever becoming a distraction for the audience.

Avenue Q is a fun show that proves that puppets can be as entertaining for thirty-year-olds as they can for three-year-olds!