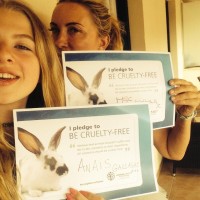 Meg Mathews and daughter Anaïs Gallagher teamed up for selfies with a heart to support Humane Society International’s Be Cruelty-Free campaign to end cruel animal testing of cosmetics. Proudly holding signed Be Cruelty-Free pledges, Meg and Anaïs hope to one day see a worldwide end to cosmetics cruelty such as rabbits having chemicals dripped in their eyes or mice being force-fed lethal doses.

Meg – a trail blazer for compassionate fashion who recently teamed up with vegan accessories label Wilby to design a new line of leather-free handbags – is a believer in beauty without cruelty.

Meg said: “When I put on my make-up, I can look myself in the mirror with a clear conscience because I know that not a single rabbit, guinea pig or mouse has suffered pain to test my beauty products. Country by country, cosmetics animal testing is being banned because it’s cruel and unnecessary. I want the whole world to #BeCrueltyFree.”

Surprisingly, testing cosmetics on animals is still legal in approximately 80 per cent of countries around the world. HSI estimates that around half a million rabbits, guinea pigs, mice and other animals suffer and die in cosmetics tests every year. However, thanks to the Be Cruelty-Free campaign, things are looking up. Cosmetics animal testing is already banned in the UK and the rest of the European Union, as well as Israel, Norway and India. Be Cruelty-Free has also helped introduce legislative Bills for a ban in Australia, Brazil, New Zealand, Taiwan and the United States, and most recently celebrated as China made its first significant step towards ending cosmetics animal testing.

Fourteen year old Anaïs said: “’I love cosmetics, but it makes me so sad to think that thousands of gentle animals are dying just for our vanity. I could never feel pretty with cruel cosmetics.”

Hundreds of cruelty-free companies around the world, such as LUSH and Barry M, produce fabulous, safe products without any animal testing. They do so by using existing ingredients combined with available state-of-the-art non-animal tests. Online cruelty-free listings such as the Leaping Bunny, Logical Harmony and My Beauty Bunny make choosing cruelty-free products easy.