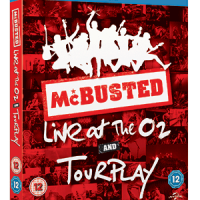 When I heard that 2/3 of Busted and McFly were forming supergroup McBusted, my inner fifteen year old did a little happy dance. Then she had a panic attack. It’s like when you find out they’re making a sequel to one of your favourite movies (I’m still too scared to watch Anchorman 2) because while you’d love more of the same, can it ever be as good? Even if it is as good, do McBusted have what it takes to survive as a band now, and not simply serve as a nice nostalgia trip?

Yes, the Busted stuff is just as awesome as it was the first time around, yes, their songs have stood the test of time and, yes, they do have what it takes to survive as a new band and not just another reunion.

The addition of Tom Fletcher, Danny Jones, Dougie Poynter and Harry Judd breathes new life into the tunes Matt Willis and James Bourne were performing while I was still sitting my GCSEs, and their newly released single Air Guitar only proves that they still have that magic touch when it comes to penning brilliantly clever and catchy music.

Their live show at the O2 Arena is a joy to watch, not only because it took me back 10+ years, but because of the energy and fun they throw into their performance. With epic music, awesome stage props and that trademark jump, you can’t help but smile as you take it all in.

The six-some have truly mastered that balance between being professional and talented musicians on stage, and looking like a bunch of mates just having a laugh. The show is near-perfect enough to seem like it was rehearsed again and again, while at the same time feeling unique and tailor-made for whatever audience was in front of them that night.

The Tourplay documentary is a great look behind the scenes. It’s funny, it’s honest and it’s interesting. It’s easy to see how much this means to the boys and how happy they are to have been embraced like they have.

As they chat openly about the early stages of the supergroup, it’s fascinating to see how it all came together.

The nod to Back To The Future at the beginning of the live show is simply brilliant, and the boys discuss this in the documentary. It’s a film that is close to all their hearts – Year 3000 helped seal the deal on Busted’s huge success, it’s where McFly got their name from – and we all have those huge movies from our childhood that had a huge impact on our lives… well this is just like that, only a huge scale.

The bottom line? The documentary is a real treat for life-long fans and the live show is just a present for everyone (I have years of Busted puns that never got used…).

It’s a bold claim, but I think that Busted were instrumental in bridging the gap between mainstream music and bands with instruments for our generation. They were like a gateway drug for noughties teens that saw them moving onto the harder stuff like Blink 182 and The Offspring.

Despite being around for years, it feels like this is just the start for these guys, and I can’t wait to see what they do next.

TOURPLAY and MCBUSTED LIVE AT THE O2 is available for digital download and to own on Blu-ray and DVD from 24th November 2014. Click here

to pick up a copy from Amazon.