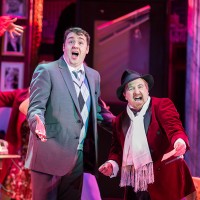 If you only make one trip to the theatre this year, make sure it’s not to see anything other than The Producers.

Based on the 1968 Mel Brooks film of the same name, the musical saltire tells the story of what happens when a down-on-his-luck Broadway producer meets a shy and bored accountant who informs him that shows that fail spectacularly are actually more profitable than those that are ‘successful’. Together, they hatch a plan to stage the world’s worst musical – Springtime for Hitler – and pocket the money that has been invested into the show when it inevitably closes after opening night.

With an all-star cast comprising celebrity comedian Jason Manford as Leo Bloom, Cory English as Max Bialystock, Tiffany Graves as Ulla and Louis Spencer as Carmen Ghia, The Producers is even more hilarious than it is sassy, camp and controversial.

The sets are impressive and the costumes are flamboyant but it’s ultimately the cast that make The Producers such a success.

For those that haven’t had the pleasure of seeing Manford step into a theatrical role (he received critical acclaim for his performance as Sweeney Todd in the West End), his fantastic portrayal of the painfully nervous Leo Bloom might come as somewhat of a surprise. The Manchurian might have carved a successful career out of his comedic timing but he is undoubtably as good a singer and actor as he is a comedian.

Cory English stuns as Max Bialystock – encompassing his sleazy and promiscuous nature with his delivery of each and every line. Tiffany Graves is also fantastic as Ulla but it is Phill Jupitus who steals the show as Neo-Nazi playwright Franz Liebkind. A scene in which he forces Leo and Max to prove they are also secret Nazi fans, through a gut-wrenchingly funny song and dance routine, leaves the audience in hysterics.

The Producers is silly, fun and not to be missed!

The Producers is currently touring the UK. For tickets and more information, please visit http://theproducersmusical.co.uk/