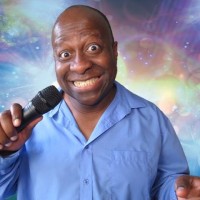 If you grew up in the Nineties, then we’re sure you’ll share our excitement over the fact that Get Your Own Back: Live! is currently being performed at the Edinburgh Fringe Festival.

The cult CBBC programme, which saw children take revenge on their teachers and family members by dunking them in a gunge tank, was a staple of our afterschool routine and we can’t wait to see it brought to life at the Fringe by original host Dave Benson.

We caught up with producer Anton Benson for The Fringe Five…

Can you tell us a bit about your show at The Edinburgh Fringe Festival 2015?

Get Your Own Back: Live! pretty much does what it says on the can – it is a live version of the classic cult children’s TV show. Of course, being a Fringe show, we’ve had to make a few adjustments to make it suitable to this environment – but all the classic elements are there including the show’s host, Children’s TV Legend Dave Benson Phillips and his special recipe of gunge!

Why did you decide to bring Get Your Own Back: Live to the Fringe this year?

We’ve brought a few shows up to the Edinburgh Fringe previously, but every time I’m up here I’ve noticed there is a huge appetite for nostalgia and for something established (amidst all the new shows). As I’ve had the pleasure of working with Dave a few times, I put the idea to him of reviving Get Your Own Back for a theatre audience. It’s taken a couple of years, but we finally made it happen!

Why should people come and see it, when there’s thousands of other shows on at the same time?

Everyone likes the chance to relive a bit of their childhood. Two years ago, I saw Knightmare: Live for the first time and thoroughly enjoyed it – but more importantly, so did the rest of the room of 30-something-year-olds. Like Knightmare: Live, we give our audiences a new and unique opportunity to see something that was special and personal to them as a child and thought they would never get a chance to experience again.

My first year at Edinburgh Fringe – the atmosphere was electric and nothing like I had ever experienced before. I particularly fell in love with the Gilded Balloon. I went to see a show in the Debating Hall and said to myself that one day I wanted to put a show into that venue. I was delighted to receive an email earlier this year to say the Balloon wanting GYOB Live in that space!

I am a huge fan of Nina Conti and her show seems to be selling very well, so maybe get a ticket now before she sells out!