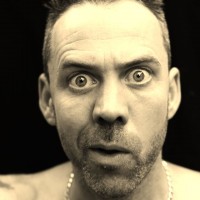 Ahead of his run at the Edinburgh Fringe Festival,  we caught up with Ro as part of our new Fringe Five series…

I’m doing a confessional show where the audience decide whether I’m going to Hell.

Why did you decide to bring Exercise Ze Demon to the Fringe?

Good point *cocks gun, blows head off*… I am pretty funny, though!

There are so many – it’s a shame I can’t remember them!

Seeing Doug Stanhope piss on the bonnet of a cop car after our party got raided was pretty good – or Phil Kay being chucked out of the artists bar for being naked and then coming back and storming the door with 12 more naked people he had recruited. That was funny. Or the time a comedian head-butted a heckler – that was pretty surreal.

There have been a lot of crazy things go down in the 13 years I’ve been coming!

Go and see Seymour Mace at The Stand – he is very funny and gave me good advice about the Fringe: “We’re not here to make money, we’re here to not have fun”.