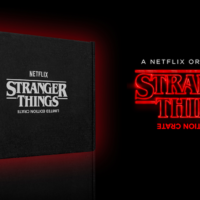 The Stranger Things Crate, which is based on moments from both seasons, previous and upcoming, will bring fans closer to the show’s mysteries in new and revealing ways. This one-time speciality crate, which has been exclusively created and curated in collaboration with Netflix, features 6 exclusively licensed items including collectables, apparel and more. The crate will ship in late October, coinciding with the release of the series’ second season.

“We came all the way from The Upside Down to develop this exclusive Stranger Things Crate with Netflix and can’t wait to share it with fans of the show,” said Chris Davis, CEO of Loot Crate.

“This is the first time fans get immersive access to the Stranger Things universe beyond the show. The assortment of products is true to Loot Crate’s ‘for fans by fans’ motto with several items designed by well-known artists who are Stranger Things fans.”

The Stranger Things Crate costs $59.99 (plus shipping and handling) for domestic purchases and $84.99 (including shipping and handling + VAT) for international purchases*. The crate will include products worth more than $111 and will ship in time for fans to celebrate the premiere of the second season!

Fans can celebrate the Stranger Things series through this unique crate experience by pre-ordering online at www.lootcrate.com/strangerthings.