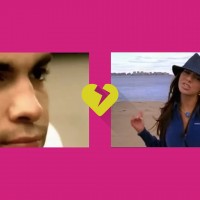 In today’s edition of Whatever happened to…? we’ll be Google-stalking R&B supposed exes, Eamon and Frankee, the original Red Ranger from Mighty Morphin Power Rangers, the cast of the Mighty Ducks movies and actor Malcolm David Kelley, AKA Walt from hit TV show Lost.

They say you should never look back, that some things should be left in the past – make your own mind up about these guys…

Have you ever watched two of your friends breaking up during a drunken night out? That’s essentially the same as Eamon and Frankee’s music efforts only they’re (unbelievably) stone-cold sober and doing it to the tune of an R&B track. When Eamon released his hit ‘Fuck It (I Don’t Want You Back)’ back in 2003, it went straight to the number one spot. Eamon is every inch your typical hurt male party – the expletive-heavy tantrum, he’s throwing shit and – naturally – he’s going straight for the ‘hoe’ insults. But, you know, there are two sides to every story… Eamon had his moment, and just when you thought it was safe to turn the radio back on, Frankee came along with ‘F.U.R.B. (Fuck You Right Back)’. Frankee claimed to be Eamon’s ex girlfriend (the one from the song) and if you thought Eamon was bad, Frankee was worse. Making fun of his efforts in the sack, saying he had crabs – hell hath no fury like a hoe scorned. Eamon claimed he had never met Frankee, and that she was just cashing in – although he did give her permission to sample his track, so everyone’s a winner. Or a loser – one or the other. They reigned terror on the charts for seven weeks between them, proving that, despite the fact they’re both pretty ‘whack’ songs, they were still catchy as hell… but where are they now? Eamon is still making music, and a quick glance at his Facebook page seems to prove that he hasn’t aged a day in the past ten years. Frankee doesn’t seem to be up to much, having failed to come out with another hit after ‘F.U.R.B’ she was dropped by her record label, but she doesn’t look ten years older either, proving dissing is good for the skin as well as the soul.

When I was a kid, Mighty Morphin Power Rangers was one of my favourite shows on TV, and I can’t be certain who I clapped eyes on first, so we’ll say that Austin St. John who played Jason shares the honour of being my first love with The New Adventures of Superman star, Dean Cain – proof that I’ve had a consistent ‘type’ my entire life. From his bulging muscles to his kick-ass fighting skills to the fact he was frequently saving the world, it was hard not to fall in love with Jason. Can you believe it’s been over twenty years since Mighty Morphin Power Rangers hit our screens? That means that Austin St. John is now 40 years old – but what is he doing, and is he still a fittie? Excuse me while all my fantasies come true. According to his Wikipedia page, Austin has been working as an emergency medical technician and firefighter around Washington, D.C. – so he’s saving lives and wearing a sexy uniform while he’s at it. Also, yep, still handsome.

Everyone loves the Mighty Ducks movies – about a kids hockey team coached by a self-centred lawyer (Emilio Estevez). I was delighted to learn that the cast of the sequel, D2: The Mighty Ducks, had reunited on Sunday to celebrate twenty years since the flick’s release. The likes of Mike Vitar (Luis Mendoza), Garrett Henson (Guy Germaine), Marguerite Moreau (Connie Moreau), Vincent Larusso (Adam Banks), Aaron Lohr (Dean Portman) and Scott Whyte (Gunnar Stahl) got together for the reunion, where they recreated they famous ‘Flying V’. Notable absentees were Joshua Jackson (Charlie Conway), Kenan Thompson (Russ Tyler) and Emilio Estevez. So, what’s everyone up to now? You don’t need me to tell you that Joshua Jackson is still enjoying a career in acting, staring in the likes of Dawson’s Creek, Fringe and forthcoming series The Affair. In fact, most of the cast are still acting. A special shoutout has to go out to Flecking favourite Scott Whyte, who is not only an awesome musician and actor, but is also lending his voice to video games, and also Mike Vitar – he didn’t pursue a career in acting, he became a firefighter with the LAFD. He was honoured for his heroic work in 2003, after rescuing fellow firefighters when the roof of a Hollywood Hills home collapsed while they were trying to put a fire out.

Fans of the hit TV show Lost will remember Malcolm David Kelley who played Michael Dawson’s 10-year-old son, Walt – if only because he always seemed to be hollering his name. Malcolm starred in 33 episodes of the show, but he was a teenager the last time I saw him on-screen, and he’s been off my radar since. I recently realised that Malcolm was right under my nose, when I found out he was half of pop duo MKTO, best-know for their hit track ‘Classic’. Lost recently celebrated its 10th birthday, and Malcolm revealed that he missed Vincent, the dog, and that he would be having a Lost Netflix marathon to celebrate the shows anniversary. MKTO are currently on tour with Demi Lovato.