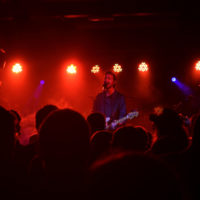 Wild Beasts are a band that have been previously described as Marmite – something many consider either one of the most glorious thing you can put it your mouth or absolutely vile. In terms of Wild Beasts, though, I think what this description means is that they are a band who have practically shaped and defined their own genre, which they continue to develop.

Arty types can all too often be pretentious and unapproachable but, at their show at The Welly Club in Hull, Wild Beasts proved to be anything but. The Cumbrian quartet didn’t just put on a show that not only felt tailor-made, they made the audience feel like part of the gang, like we were all buddies having a laugh together.

It was a show filled with personal touches and revelations. The band members weren’t afraid to make fun of themselves, or each other. We want to see our musicians with personalities, who seem like living, breathing humans, who care about the rugby score or the fact that their ex girlfriend is now living in a big house with a Swiss-Italian doctor.

Hayden Thorpe and Tom Fleming make quite the double act on stage. Their stunning vocals are only rivalled by one another and, a la Marmite, are very much their own. But isn’t that just the band, through and through, with their funky, sexy beats, brilliant lyrics and unique stage presence – I don’t think I’ve seen many frontmen drinking what appears to be a glass of sherry throughout their set.

In a world full of generic pop and a chart dominated by the style de jour, be Marmite. Be Wild Beasts.