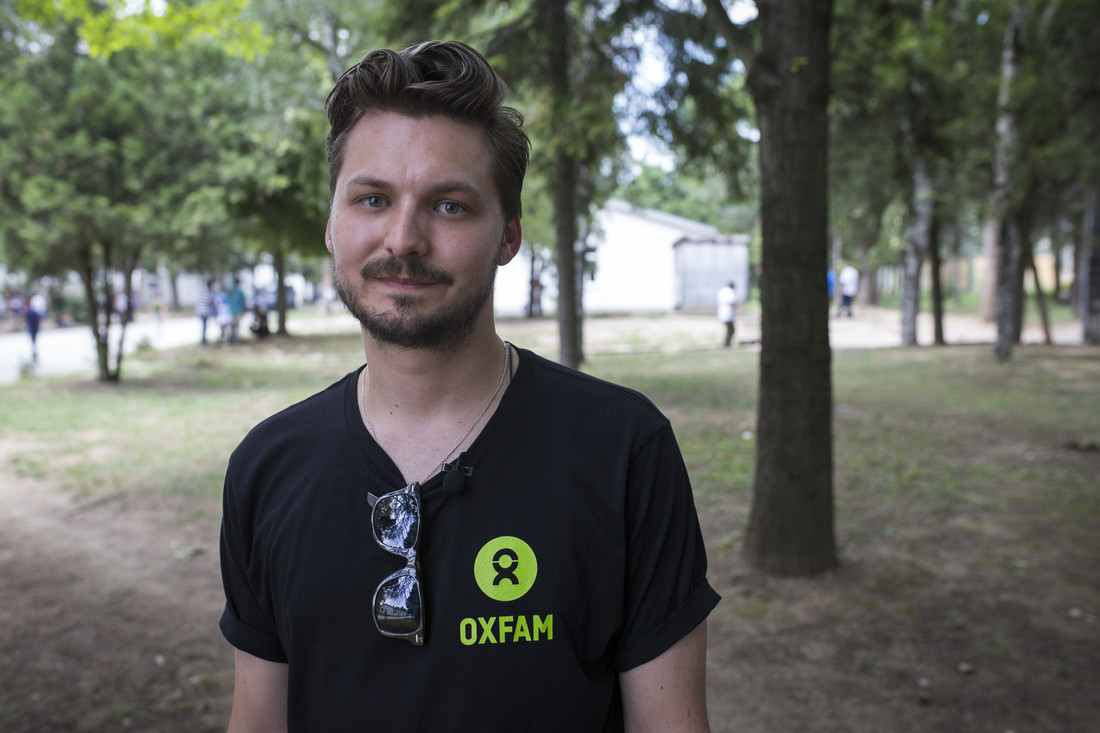 Members of the band Editors rocked up to a camp in Serbia to pay a surprise visit to some of the thousands of refugees trapped in the country. They gave encouragement to aspiring musicians living in the camp and saw Oxfam’s vital work supporting refugees.

Tom Smith, Elliot Williams and Ed Lay took a day out of their European tour to visit Obrenovac camp on the outskirts of Belgrade. The converted army barracks hosts around 700 male refugees, many of whom had hoped to reach other European countries but have been trapped in Serbia for months or years on end.

In the camp’s busy canteen, the band sat with the men and shared a meal of rice and vegetable curry provided by Oxfam and volunteers from BelgrAID. They also listened in to rehearsals of a band from the camp containing members from as far apart as Cuba and Pakistan.

Tom Smith, Editors singer and guitarist, said: “On a human level, it’s quite hard to ignore people risking everything to leave their homes. To make that decision to go and not quite know where you’re going to get to or what’s going to happen to you – I can’t imagine the amount of strain that puts on a person, on a family, on your relationships.”

Speaking of the musicians, Smith said: “It’s easy to understand how having something like music in your life when you’re in a situation like this is not just a welcome distraction but also gives you more of a purpose. To be able to play drums or sing with people – I would do it if I was in the same situation.”

The band recently revealed that a track from their most recent album Violence, named Hallelujah (So Low), was inspired by meeting refugees with Oxfam in Greece in 2016. The band kick off a string of UK festival dates tomorrow (7 July) with an appearance at British Summer Time in London’s Hyde Park.

Elliot Williams, Editors keyboardist, said: “I wish I could put a lot of people in my position here today to be able to look around and see that these people aren’t something to be afraid of. They’re normal people that have had to make incredibly tough decisions to leave their homes and try and find a safer place to live. That shouldn’t be seen in a negative light.”

Over a million refugees from Syria and other countries passed through Serbia in 2015 and 2016 before countries in eastern Europe closed their borders. Today around 4,000 people remain in 18 camps across Serbia or sleeping rough. Oxfam and its partners have documented extreme abuse of refugees at the hands of state officials in neighbouring Hungary, Croatia, Macedonia and Bulgaria.

Jovana Arsenijević, Oxfam’s advocacy officer in Serbia, said: “The young men living in the camp, especially the musicians among them, were so surprised and delighted to have rock stars visiting the camp. Many of the residents feel depressed and hopeless because they miss their families and homes and they see no clear future for themselves. Nothing like this normally happens here.”

On World Refugee Day, Oxfam launched a summer campaign inviting people in the UK to show solidarity with refugees ahead of important UN talks in September. In Europe, Oxfam is calling on governments to provide more legal routes for refugees and other migrants to apply for asylum, work or study in an orderly and safe manner.