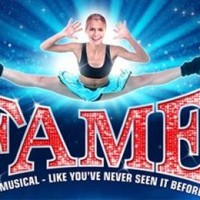 With reality television ‘stars’ and famous-by-default socialites constantly grabbing more headlines than Oscar-winners, world leaders and musical legends, the key message in Fame rings truer today than it ever has.

The famous musical, which follows a group of young and energetic students as they work their way through the New York High School of Performing Arts, arrived at The Playhouse in Edinburgh last night as part of its 25th anniversary tour.

Gary Lloyd’s production, billed as ‘Fame for a new generation’, promised to be a contemporary take on the iconic 80s musical. Whilst the inclusion of iPads and mobile phones in several dance sequences certainly gave an obvious nod to modern day life, the additions were far from revolutionary and didn’t seem to add any real value to the production.

From a musical point of view, the addition of a live band playing above the stage allowed for more focus to be placed on some underrated numbers from the show’s score, including Pray I Make PA and These Are My Children (which was stunningly performed by former I’d Do Anything contestant Landi Oshinowo). It was great to see them stand their ground alongside the shows iconic title track for once.

Alex Thomas radiated star quality throughout his portrayal of Tyrone Jackson, the amazingly talented but illiterate student who risks failing the entire year if he doesn’t manage to pass English. Thomas showcased an admirable versatility in his electric dancing abilities, strongly commanding the stage with an aggressive street dance one minute and delicately gliding across it in during a flawless ballet number the next. A wonderful performer who we will definitely be hearing more about in the future.

Jodie Steele is an impressive dancer and powerful vocalist (she delivered fantastic performances of Fame and In LA as Carmen Diaz) but her acting fell somewhat short of expectations, with her American accent slipping away on more than one occasion. A definite double threat, if not quite a triple.

Whilst it’s understandable the producers were keen to try and convert a new generation of youngsters into Fame fans, one of the main reasons the show continues to tour successfully year after year is the sense of nostalgia that it brings. Whilst the minor changes were too small to actually entice a whole new audience, they seemed big enough to leave some fans of the original feeling disappointed and wondering where the hell all the legwarmers had got to.