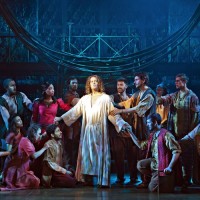 Easter weekend may have been and gone but a packed audience still filled The Edinburgh Playhouse last night to see Bob Thomson’s and Bill Kenright’s adaptation of Tim Rice and Andrew Lloyd Webber’s Jesus Christ Superstar come to life.

Based on the New Testament’s Gospel of St John, the controversial rock opera takes the audience through the events that ultimately led to the crucifixion of Jesus Christ, examining the many different sides of those involved.

Whilst the show is certainly appropriate for this time of year, it most certainly isn’t the most lavish version of the 1970’s hit to date. In spite of the casting boasting not one but two former X Factor contestants (Rhydian Roberts as Pontius Pilate and Rachel Adedeji as Mary Magdalane), the show lacks the sparkle that was exhibited during 2012’s lavish arena tour.

However, what it lacks in glamour it makes up for in human emotion. Glenn Carter stuns in the role of Jesus Christ – he was first cast in the role almost 20 years ago and his experience is evident through his precise, focused performance. The crucifixion scene is haunting and harrowingly difficult to watch, just as it should be.

Tim Rogers is less impressive in his portrayal of the loyal Judas Iscariot, with his vocals sounding somewhat stretched and unclear on more than one occasion. He gains momentum as the show progresses and, eventually, turns in the rousing rendition of Superstar that everyone has come to see.

All things considered, Jesus Christ Superstar is a classic and thought-provoking show that’s worth going to see at least once.