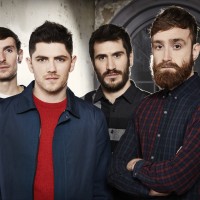 The Radio 1 Stage is T in the Park’s second largest and can be counted on to be the place where you’re guaranteed to find the coolest acts on the scene performing.

To help you decide who’s worth leaving your tent for, we’ve picked out our top five Radio 1 Stage acts…

If Twin Atlantic’s triumphant homecoming gig at The Hydro in Glasgow in May is anything to go by, you’re not going to want to miss them headlining the Radio 1 stage on Saturday.

Believe it or not, 2015 will mark the seventh time the band have played the festival (they rocked a mid-afternoon slot on the Main Stage last year) but don’t worry – they can be relied upon to bring something fresh every year – and we predict they’ll be headlining the Main Stage next year!

It’s been less than a year since alternative rockers Marmozet released their debut album but their reputation for putting on explosive live shows has already helped them secure a spot on the Radio 1 Stage.

Fresh from supporting Muse on their 2015 UK Psycho Tour, the band are expected to perform tracks from 2014’s The Weird and Wonderful Marmozets. Catch them on Sunday afternoon!

One of the most divisive acts on this year’s line-up has to be dance supremo David Guetta. Like last year’s headliner Calvin Harris, Guetta is used to performing in some of the world’s most renowned nightclubs so is sure to get the weekend’s party started when he closes the stage on Friday night. We’re secretly hoping he might be joined onstage for an exciting collaboration!

Enter Shikari have never been a band to shy away from politics and we’re looking forward to seeing what they have to say when they take to the stage on Saturday. The British band, known for their ability to merge multiple genres of music together with amazing results, will undoubtedly attract huge crowds so make sure you get there early if you don’t want to be stuck at the back!

She may have written one of 2012’s most recognisable anthems (I Love It by Icona Pop, in case you’ve been living under a rock for the past two years!) but Charli XCX continues to loiter on the brink of mainstream success as a pop star in her own right.

Whilst the prospect of dancing to Boom Clap along with thousands of fellow festival-goers should be enough to persuade you to go and watch her perform on Saturday afternoon, we’re actually really looking forward to seeing what else she has to offer!