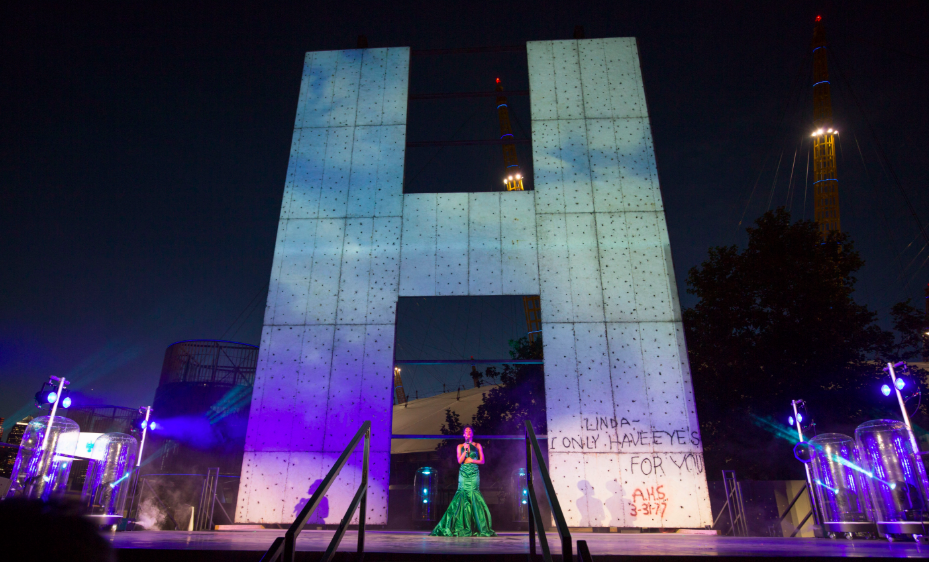 An iconic symbol of Hollywood has landed in London, as the ‘H’ from the original Hollywood sign arrives at the O2 arena. This once-in-a-lifetime preview will be celebrated with a live musical show that pays tribute to some of the greatest musical hits from stage and screen.

The ‘H’ sign is making its first public appearance in 40 years following its replacement in 1978. The sign was purchased in 2005 by collector and renowned Hollywood artist Bill Mack, who re-constructed the H from the original metal, and used sheet metal from the original sign as a medium on which to paint the greats from the Golden Age of Hollywood.

As darkness falls in London, the Hollywood Nights show will light up the Hollywood ‘H’ with an unforgettable musical theatre performance of some of the West End and film’s much-loved classics, including hits from Chicago, the Wizard of Oz, 42nd Street, and Dirty Dancing. The show is directed by Internationally acclaimed Creative Director and Choreographer Nathan Clarke, the choreographer behind Strictly Come Dancing and the Olympic opening. The Hollywood Nights Show runs until 14th July.

The H sign is on display as part of the Heart of Hollywood Tour, an unforgettable experience for movie and music lovers of all ages. The exhibition will give visitors the chance to follow in the footsteps of Hollywood greats like Marilyn Monroe, John Wayne and Charlie Chaplin, who all touched the sign for good luck. At 45 feet tall and weighing 95 tons, the ‘H’ stands taller than three London double decker buses. It can even be seen from space.

Heart of Hollywood Tour promoter Keith Douglas said “we’re offering people a once in a lifetime chance to take a picture with and touch the Hollywood sign. All the young actors and actresses climbed Mount Lee to touch it for luck and have pictures taken with it– it is a rite of passage in Hollywood. There is also other Hollywood memorabilia, like Marilyn Monroe’s outfits and Elvis Presley’s jumpsuit.”

The Heart of Hollywood Tour will run until 17th July at the O2. After a multi-city tour, the sign will return to LA, where it will become a permanent installation in time for its 100th anniversary.

Tickets for the show can be bought at HeartofHollywoodTour.com