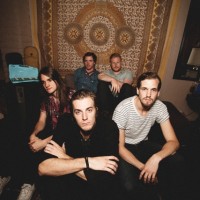 It has been a year of important milestones for Arizona’s The Maine. This past weekend, the band celebrated the ten year anniversary of the release of their first full length album Can’t Stop Won’t Stop (Fearless Records). In its honour, the band launched a limited edition vinyl pressing of the record. They also took the opportunity to announce the upcoming 8123 Fest, happening in Phoenix, AZ from January 18th – 20th 2019.

The festival has been highly anticipated by fans both locally and internationally since the band hosted their first ever festival in the desert for their ten year anniversary as a band. 8123 Fest 2017 saw fans fly in from all over the world to attend the three day event. Last year’s 8123 Fest featured performances from The Maine as well as The Summer Set, The Technicolors, John The Ghost and more. It also witnessed special reunion sets from Brighten, This Century, and A Rocket To The Moon.

Now back for another year, 8123 Fest is projected to be bigger and better than ever before. The Maine will perform their debut album Can’t Stop Won’t Stop in full for the first and last time – along with additional songs from their entire back catalogue. The lineup is expected to be bigger this year, with lineup announcements to come. As always, the band will be doing a free meet & greet for all fans in attendance.

8123 Fest 2017 was the biggest party of their career and 8123 Fest 2019 doesn’t show any signs of slowing down. The Maine is currently spending their summer out on the final Vans Warped Tour before they head into the studio this fall. 8123 Fest will act as the band’s welcome back bash – giving fans their first chance to catch the band live after their touring break spent recording.